An analysis of the Microsoft Security Intelligence Report Q2 2011. 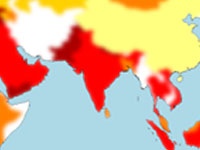 Microsoft has just released its volume 11 of its Security Intelligence Report (SIR) for the first and second quarter of 2011, which has published some alarming findings for India. While there has been a general trend in a decrease in malware infections globally, there appears to be an opposite trend in India. Newer versions of the Windows operating system have been found to be the least affected, possibly due to several vulnerabilities being patched in newer releases. Similarly, 64-bit versions were found to be consistently less affected than 32-bit versions, possibly because of the popularity of the latter.

Of the various threat types, adware has been dominating, thanks to a new pair of families Win32/OpenCandy and Win32/ShopperReports. Other potentially unwanted software families, such as Win32/Keygen that propagates through key generators, have also seen an increase in detection. Worms and Trojan downloaders \ droppers showed a downward trend, while viruses have been steadily accounting for at just under 5% of total infections. The report notes that a change in behaviour of the Autorun feature in older Windows could have contributed to the decline in the number of active families as a whole. Spyware infections have been the least bothersome of all.

Unfortunately, the picture is completely different in India. Worms (38.3%) and trojans (33.6%) are found to be the most common, while adware is somewhere in the middle. Viruses also amount to around 25% of all infections, although spyware infection levels are as low as elsewhere. The report also states that India hosted 11% of all spambot IP addresses in the second quarter of 2011, up from 10.9% for the previous quarter.

How does malware spread? There are different ways in which malware threat propagation takes place.

The report states that more than a third of the malware detections were attributed to malicious software that misused the Autorun feature. 6% were found to be exploits or malicious code attempting to exploit vulnerabilities in the application or operating system. Adobe Reader documents (PDF) have also been consistently found to be more likely to be vehicles of exploits, while the RTF or Rich Text Format was also found to be a likely candidate.

How does one combat these security threats?