The smartphone offers great performance, but is let down by shoddy craftmanship. 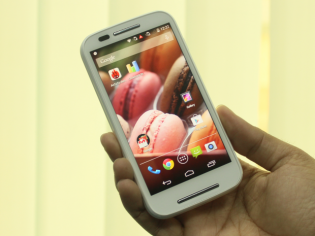 
After the phenomenal success of Moto G, Motorola rolled out the entry-level Moto E in the Indian market. The handset promises to deliver good smartphone experience for an affordable price. It is available exclusively via country’s biggest online store Flipkart for Rs 7000. The Moto E is so popular in India that it ran out of stock on its launch day. However, since the phone is not available via brick-and-mortar shops, none of these buyers had even seen the device before shelling out the money. Now that we’ve finally got hold of the device, let’s find out if it’s really worth the hype.

Design And Build
The Moto E is a sensibly sized handset that fits perfectly in your palm. It's ideal for single-handed usage — that's how a phone should be. The Moto E looks clunky and is quite hefty at 142 grams. Weight is not an issue here, but the design is. It seems as if the front and back are designed by two different teams working in isolation. The back looks incredibly good, whereas the front looks awful. If the earpiece and ambient light weren’t already looking off, the speaker grille is completely out of place. The quality of back-panel is excellent. Especially, the rubbery feel it offers is exceedingly good. The battery is not user replaceable, but you can swap the back-panels. The phone comes in Black and White. You can buy additional covers in Blue, Violet, Cherry, Turquoise, Raspberry, Lime, and Spearmint from Flipkart. Unfortunately, even the bundled back covers doesn't snap-on properly. You can feel the cover slightly shift over the main body. Once you remove the cover, you get access to SIM and microSD card slots. Upon close inspection, you can spot exposed electric wires running around the battery. That’s shocking as you don’t expect such shoddiness from a brand like Motorola. In fact, I haven't seen anything like this even from domestic brands like Micromax, Karbonn, and LAVA. Since Motorola devices are only available via online stores, buyers will realise this only after making the purchase. To sum it up, the phone is a mixed bag when it comes to the build and aesthetics. Display
The Moto E sports a 4.3" screen with 540x960 pixels. The display is IPS type, so the colour reproduction are viewing angles are quite good. The display is sharp, you're unlikely to spot any stray pixel unless you want to. One odd thing I noticed here is that the display has a weird blue glow around the edge of the screen. I believe that's due to the adhesive used to keep display in place. It's especially visible on the white background.

Specs
The device is powered by a 1.2 GHz dual-core Snapdragon 200 processor and is coupled with 1GB of RAM. There's 4 GB of internal memory. The microSD card slot supports up to 32 GB. The 5MP camera takes care of the photography department. We will come to that point later. The phone supports 3G and has two micro-SIM slots. Apart from that, you get Wi-Fi, Bluetooth, A-GPS, and 1980 mAh battery.

Software
The Moto E comes with KitKat 4.4.2. It's very similar to the stock version of Android found on Google’s Nexus 5. When most companies are releasing mid-range handsets with Jelly Bean, it's good to see Motorola offer Android 4.4.2 on its entry-level smartphone.

In terms of user experience, the Moto E feels just like its elder sibling the Moto G. It's very quick at menu navigation, which is quite an achievement for an affordable Android device. However, like any Android device it starts slowing down as you go on installing apps. 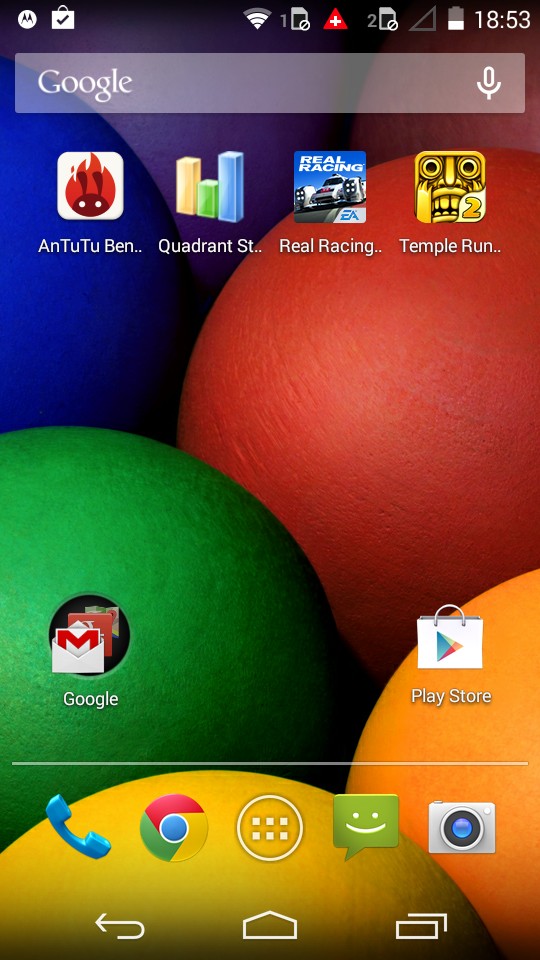 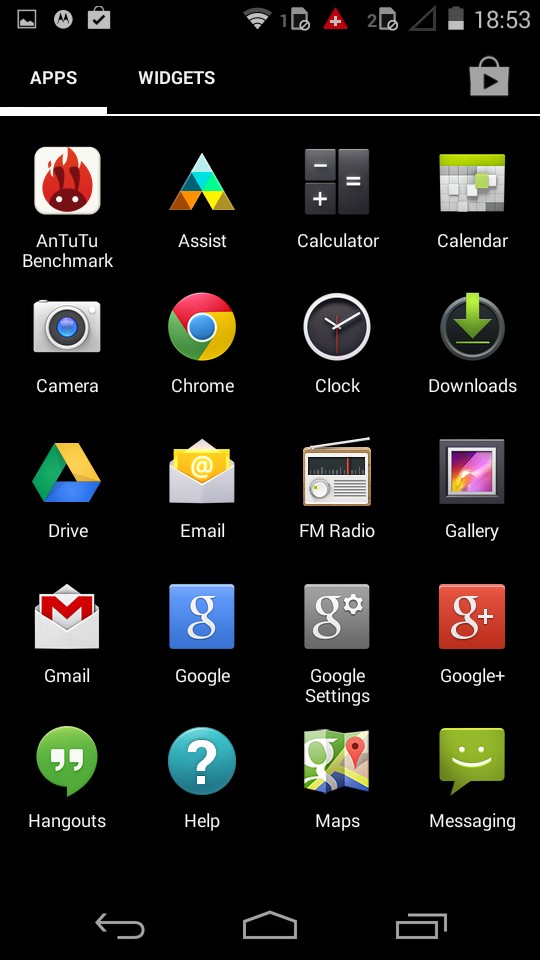 Gaming is where this handset surprises us. It not only handles casual games such as Temple Run and Angry Birds, but also graphics intensive titles such as the Real Racing 3. These games run on very low settings, but they're playable and that's what matters to most users. It gives the Moto E a clear lead over the similarly priced Lumia 520 when it comes to gaming. To gauge the performance, we also ran popular synthetic benchmarks, and here are the results: 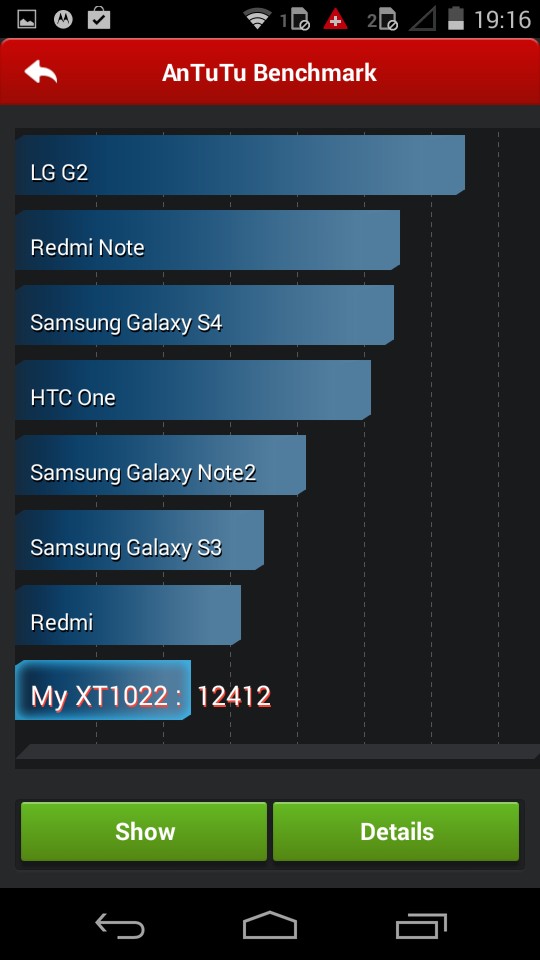 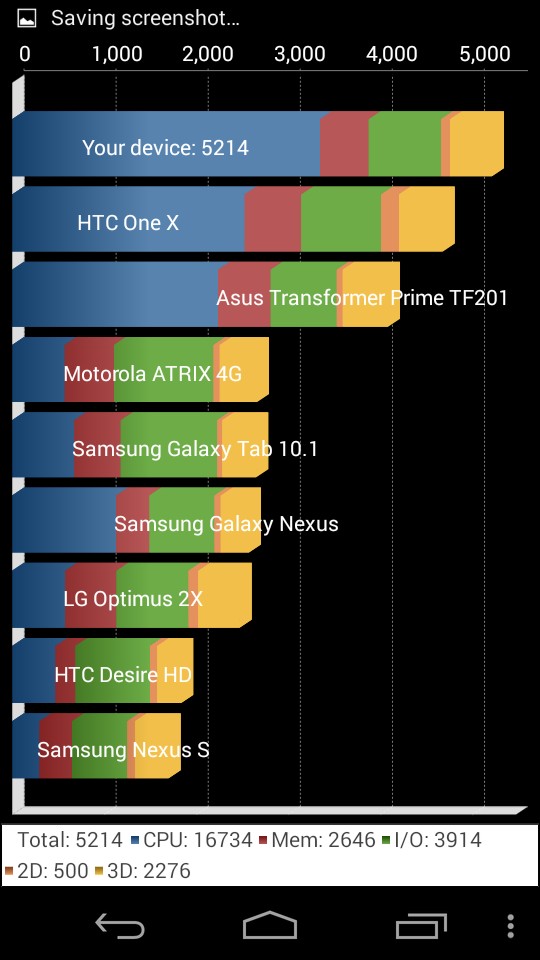 Multimedia
The bundles earphones sound as bad as they look. The devices sound output is disappointing too. Even good after-market earphones can't salvage it. Coming to the subject of video playback, the Moto E can take care of 720p files. You can install MxPlayer to play 1080p files, but playback turns out to be very choppy.

Camera
Motorola has a minimalistic camera interface. The camera viewfinder has no buttons except for the Still/Camcorder switch. The 5 megapixel camera lacks auto focus feature. To make up for that, Motorola has come up with a neat manual focusing option. There's a circle in the viewfinder, which you can drag wherever you want the focus to be. The concept is nice, but it doesn't function properly on this hardware. 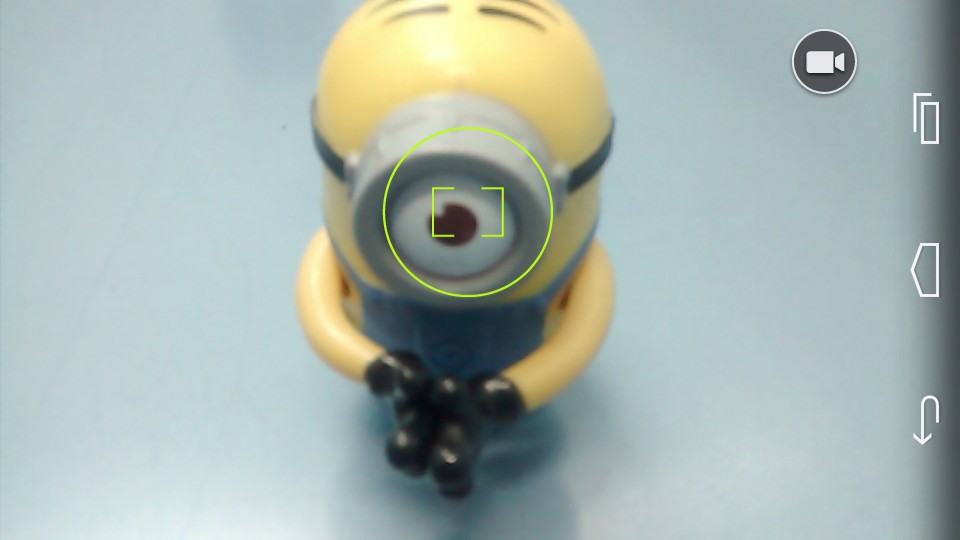 The optics are pathetic. The images contain rampant visual noise. The colours look off and the amount of detail is disappointing. Things don't get any better in terms of video recording either. The highest you can go in terms of the quality is 480p. The resulting videos too lack detail.

Battery Life
The Moto E’s 1980 mAh battery powers the device for a day and half. However, it takes more than three hours to full charge the device.

Telephony And Messaging
The phone's network reception was spotless during the testing. However, the ear-piece makes a cracking sound when the person on the other end is loud. We had faced a similar issue in the Moto G also.

Verdict
The Moto E is priced aggressively at Rs 7000. No other Android handset from a top-tier manufacturer can currently compete with the Moto E. Despite a few niggles, we would like to recommend for its sharp display and impressive performance. Plus, latest Android Kitkat further sweetens the deal. The only potential deal breaker here are the camera and shoddy craftsmanship. The bottom-line is that if you’re looking for an entry-level Android smartphone from a reputed brand, Moto E is your only option. If you’re open to try out other platforms, the Lumia 520 is a better build handset that offers much polished smartphone experience.