Aakash Tablet May Be Shelved

Reports suggest that HRD ministry may not extend DataWind's letter of credit. 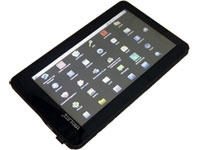 One look at the specs and you can't be blamed for thinking that DataWind's first-generation Aaskash tablet is destined to be a no-show. It now seems that the curtains may be pulled down on the country's cheapest tablet soon! Reports suggest that the Ministry of Human Resource Development (HRD) is in no mood to extend the letter of credit (LC) to the company. The LC expires by the end of this month. The Government, however, will not do away with the tablets just yet, as it plans to sell these devices in rural areas.

DataWind CEO Suneet Singh Tuli however, claims that the tablet is on track and is in the process of being improved. He says, "There is no indication that the project will be shelved, and there s no credence to these sensationalist stories. There is no 'news' there. The Aakash tablet has met and exceeded all the specifications, features and criteria specified, and the product s quality has been confirmed by both national and international labs".

The HRD ministry had initially asked DataWind to produce one lakh units and has already sold 30,000 of them. The 7" Android 2.2 tablet is powered by a 366 MHz processor. Armed with two USB ports and a multimedia player, the device offers 180 minutes of battery life.