A powerful phone that could use some refinement. 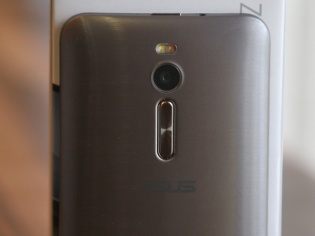 The Zenfone 5 was the most successful device in Asus first wave of smartphones. Little wonder then, Zenfone 2 has big shoes to fill. The new phone comes in three variants, and the one with 4 GB RAM costs more than double the Zenfone 5. Let's find out if Asus has another winner in its line-up. The phone looks a lot like the LG G3. Mostly because of the curved back and rear volume buttons. By moving these buttons to rear, Asus has managed to achieve thin sides. The lock button has been moved to the top, making it impossible to reach with one-handed use. Thankfully, tapping twice on the screen does the trick. 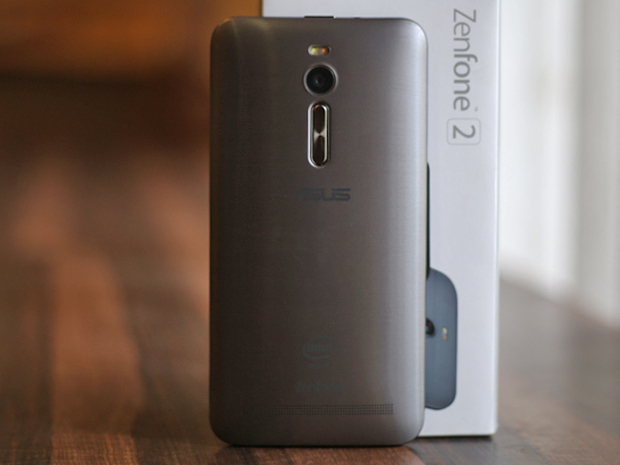 That nice matte finish we loved on the Zenfone 5 is gone too. You now get faux metal with gloss finish. It doesn't help with grip at all.

The removable back-panel gives access to two micro-SIM and a microSD slot. However, the battery is not user replaceable.

Screen
As mentioned earlier, the Zenfone 2 comes with a relatively bigger 5.5-inch panel. Along with the size, the panel's pixel count has also gone up.

The IPS (In-Pane Switching) screen produces good colours. However, it seemed a little low in terms of the brightness. Like most phones these days, the screen is protected by Gorilla Glass 3.

Specifications
The Zenfone 2 comes in many confusing variants. The one I received is the 4 GB version that everyone has been talking about. The phone comes with 32 GB internal storage. MicroSD card slot supports up to 64 GB of additional storage.

Asus has gone with a 13 megapixel rear camera with dual-LED flash. There's a 5 megapixel front-facing snapper for selfies and video chat. Other features include Wi-Fi, Bluetooh 4.0, A-GPS, NFC, and FM radio. A 3000 mAh battery provides juice to the phone.

Software
The Zenfone 2 ships with Android 5.0 Lollipop. The OS has company's ZenUI on top of it. The interface is very much like how it was on the Zenfone 5. It now comes with more colours and transition effects. Sure, you can turn off most of them. However, I find the Zenfone 5's UI neater. The phone runs smooth most of the time. You won't notice the performance difference between this phone and any other device with 2 GB RAM though. True, you can run relatively more apps in the background on the Zenfone 2, but at least for me it didn't make much of a difference in use case.

Camera
The Zenfone 2 comes with a 13 megapixel camera. As usual, it comes with plethora of modes such as Panorama, Miniature, Smart Remove, Depth of Field, Night, HDR, and Manual.

On a bright day, the camera produces good snaps. On phone, the photos look sharp with accurate colours. When viewed on PC though, you can notice the excessive visual noise. Click here to check the sample.

Asus claims that its PixelMaster technology delivers brighter and detailed shots in low-light conditions. However in reality, its performance is average.

Video recording quality goes as high as Full HD. Similar to the still photography, videos turn out to be good in proper lighting conditions. But in low-light conditions, you can see the artefacts. So overall, considering the phone's price tag, camera's performance is underwhelming.

Multimedia
The Zenfone 2's in-built player does not support MKV, DivX, and XVid videos. However, a good third-party app such as MXPlayer does the trick. Audio output is also quite good. The music player offers multiple equaliser settings and sound effects to fine tune it for your taste. Telephony And Messaging
The dual-SIM handset supports 4G LTE. The calls sounded crisp. Can't say much about reception, as both Vodafone and Airtel has patchy coverage in Mumbai.

In the messaging department, the keyboard layout is designed to accommodate numeric keys. The word prediction is aggressive, so the first you would want to do is deactivate it.

Battery
The 3000 mAh battery looks good on paper. But, in our video playback test, it lasted only for 8 hours. Under normal use, it keeps the phone running for less than a day and half.

Verdict
In terms of specs, the Zenfone 2 has a lot to flaunt over its predecessor. The variant we reviewed comes with 4 GB RAM and a powerful processor. Screen resolution has also gone up. However, its 13 megapixel camera doesn't live up to the expectations. As far as the fit and finish go, I prefer the Zenfone 5 over the new phone.

Terrific value proposition was one of the reasons behind the Zenfone 5's success. And that aspect I think is missing in the latest Zenfone.

If you multitask heavily, definitely go for the Zenfone 2. However, if you're not crazy about RAM, the 2nd Moto X offers a brilliant screen in this price range. Those into photography, should consider the Lumia 830.