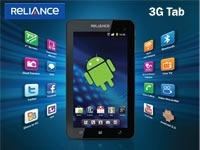 The tablet war is certainly getting hotter and everybody wants a piece of the pie. A new entrant to this war is Reliance with its Reliance 3G Tab, based on Android 2.3 (Gingerbread). Let us find out what this device has to offer.

Design And Specs
The tablet features smoothly rounded corners and is of good build quality. The back panel has an aluminium finish, whereas the front features a scratch-resistant 7" TFT capacitive touchscreen with pixel dimensions of 800x480. The devices weighs in at 389 g and feels a bit bulky to hold, but nothing that you can't get accustomed to. Overall, the device is pleasant to hold and feels sturdy in your hand.

The front also has three one-touch keys for navigation and a VGA camera for video calling, while the back has a 2 megapixel camera.

On the inside, the 3G Tab packs in an 800 MHz processor with 512 MB RAM, coupled with a 3400 mAh Li-ion battery. The internal memory of the device is a measly 128 MB - thankfully, it has a card slot that supports up to 32 GB microSD cards.

As for the rest, it carries the usual Wi-Fi, 3G, Bluetooth 2.0, GPS, and FM radio, which we have all come to expect from devices these days. The retail box ships with earphones, a charger, micro-USB cable, and a 4 GB microSD card to go along with the tablet.


User Interface And Software
The tablet runs Gingerbread and has not been customized much by Reliance. The screen is responsive; however, it has a noticeable lag during transitions, most probably due to the slow processor. The one-touch keys mentioned earlier do not have a backlight, making it difficult to use the device in the dark. The 3G Tab comes preloaded with Reliance's R World Online application, which hardly anyone will use, considering the wide variety of apps in the Android Market. It also includes a file explorer, documents manager, and task manager.

Connectivity
On the connectivity front, the tablet can be used only with a Reliance connection. Having said that, you can use it perfectly well Wi-Fi without a SIM card. However, to make calls or use 3G \ GPRS, only a Reliance GSM SIM can be used. From my time spent with the device, the speeds offered were good, at least in the Mumbai circle.

The device is also capable of making voice calls. In my tests, the call clarity was decent with the bundled earphones, but voices were barely legible with the loudspeaker.

Multimedia
The built-in video player is no good as it does not support most formats, so I took MoboPlayer from the Android Market for a spin. Although I could play all my SD videos and 700 MB DVD rips effortlessly, it did not support smooth playback of 720p HD videos, again due to the slow processor. While that may not necessarily be a bad thing for a 7" device with 800x480 pixels, it will be a problem for users who have a collection of exclusively 720p videos.

On the audio front, the in-built speakers are piss poor, as is apparent from the results of my test call in loudspeaker mode. The audio is completely flat and your best bet is to use the bundled earphones, which offer some respite.

The less said about the camera, the better. At 2 megapixels, the rear camera is practically useless, especially considering the lack of a flash or even auto-focus. The front VGA camera serves its purpose for video calling.

Battery
The 3400 mAh Lithium-ion battery packs in quite a punch, with the specs claiming up to nine hours of talk time. In our tests, while continuously using it for video playback, the battery crossed the 4-hour mark with relative ease, while keeping 3G and Wi-Fi turned off. I was able to watch two full-length Hollywood movies and still have a bit of juice left over. Under normal daily use, it easily lasted the entire day with 3G switched on, while periodically browsing the web, playing music, and making the occasional phone call.

Conclusion
After using the tablet for four days, I feel it could have done with slightly better hardware, although for the price of Rs 13,000, you can't complain too much about it. Another issue is that the tablet is locked to Reliance's network and its costly 3G plans (refer to the tariff chart below). To be fair, this is the case with other operators as well. Hopefully, the 3G tariffs will decrease in time to come.

Despite its obvious shortcomings, the Reliance 3G Tab makes for a great companion for those constantly travelling, or those who are simply looking for their first tablet. This of course is due to its affordable pricing. The media playback, web browsing, and phone calling features, coupled with a great battery life, are something that would appeal to professionals as well as home users.

I would suggest purchasing the more recent iberry BT07i tablet. It offers better features for a far lesser price. You can read our full review of it here: http://www.techtree.com/content/reviews/806/review-iberry-bt07i.html
Submitted by Rizwan Memon on Tue, 24/04/2012 - 14:37
News Corner