Home » Mobiles » Review: LG G3 — An All Round Performer

Review: LG G3 — An All Round Performer | TechTree.com

Review: LG G3 — An All Round Performer

The handset shines with its screen, camera, and performance. After a series of lacklustre phones, the G2 brought LG back in the smartphone game. It did not break its rival GALAXY S4's sales records, but was well received by the critics. Especially, the camera and screen were among the best in its class. Now a year on, the company has come up with the G3 that promises to take things to the next level with a Quad HD screen and laser-assisted camera. So it a worthy successor of the G2. Let's find out.

Design
The G3 isn't quite a trend-setter like the HTC One, but it looks way better than the Samsung GALAXy S5. As mentioned in our preview article, the G3's design is very much like its predecessor. The phone has a large screen and thin bezels. This design decision has helped LG keep the phone's size in check. The curved back helps with the grip to some extent. However, it's not a phone you can comfortably operate without using both hands. 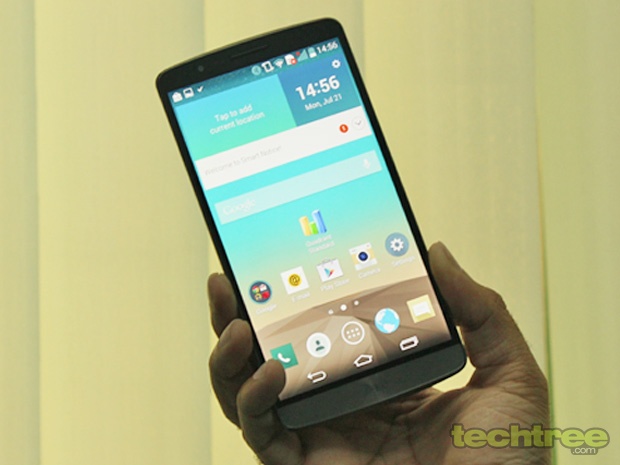 It does differ from the G2 in some aspects though. For starters, the South Korean brand has done away with the G2's glossy plastic. Instead of that, the G3 offers a faux-metal finish. It looks good, but is prone to scratches. Within my week's use, the phone got many hairline scratches. Plus, the rear 'Lock' button lost its colour at a few spots. Unlike most flagship phones, the G3 comes with a removable back-panel that gives access to the battery, microSD, and SIM card slot. The phone comes with LG's signature rear 'Lock' key. The button is sandwiched between the Volume Rocker. That's exactly how it's positioned on the G2. The buttons are easily accessible with your index finger, however, the phone tends to pop-out from your hand while using these buttons. So although the key placement is unique, it's not better than the conventional setup. Display
The LG G3 features a 5.5-inch IPS with 1440x2560 pixels. With the pixel density of 534 ppi, the display is incredibly sharp. The pre-loaded Quad HD videos look amazing on this screen. However, you can't spot much of a difference between the G3 and other flagship phones if you're playing 720p and 1080p videos. Since it's an IPS-type display, the viewing angles are wide. The colour reproduction is great too, save for the blacks. For scratch protection, LG has used Corning's Gorilla Glass 3.

Key Specifications
LG's latest flagship is powered by Qualcomm's Snapdragon 801 processor clocked at 2.5 GHz. The 32 GB model packs in 3 GB RAM, whereas 16 GB model settles for 2 GB. In the photography department, you get a 13 megapixel camera. Other features include Wi-Fi, Bluetooth, A-GPS, and 3000 mAh battery.

Software
The LG G3 ships with Android 4.4 Kitkat. However, as you'd expect from the Korean manufacturers, the interface is nothing like the vanilla Android. LG's Optimus UI looks a bit toned-down compared to what was there on the G2. Following Microsoft and Apple, the Korean brand has gone with a 'flat' UI. However, the tacky animation effects can be still found across the interface. For instance, the phone offers Light Particle (Glitter), Soda, Vector Circle effects for the lock screen. Speaking of which, the phone comes with the Knock Code feature that allows you to wake and unlock the screen with a tap pattern. 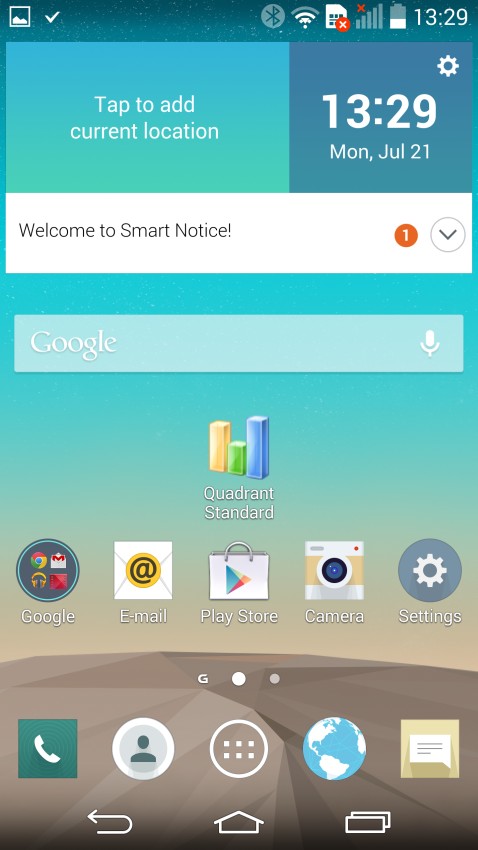 The G3, much like its predecessor, packs in an Infrared port. Using this, you can control TVs, music systems, and AC. If your product is not listed in the presets, you can even map your existing remote's keys on this phone.

The notification area does more than just displaying alerts. It feature a bunch of quick toggles, notifications, and brightness slider. The button animations are also quite cheesy here. If things weren't too crowded already, LG gives you an option to squeeze in a mini remote to the notification bar. Multitasking menu is another place where LG has made things too crowded. 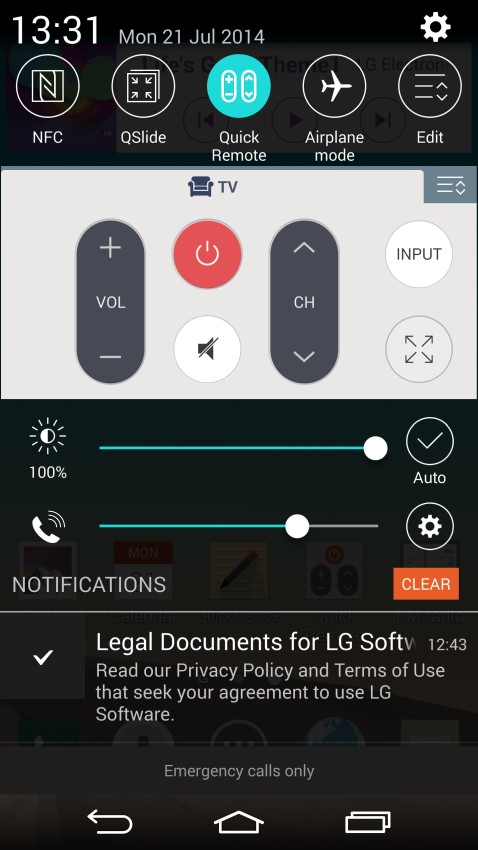 The G3 comes with Dual Window feature which is exactly like Samsung's Multi Windows functionality. It allows you to split the screen vertically to run two apps simultaneously. The feature works, but why would anyone want to do something like this on a phone is beyond me. The G3 mostly runs smooth, but there's a slight stutter throughout the user interface. Those using iPhone or Windows Phone will be quick to notice this. Moving onto gaming, the Snapdragon 801 handles every Android game with an ease. However, at the time of publishing this review, a few games including the Real Racing 3 are not yet compatible the Quad HD screen. Those interested in synthetic benchmarks can check out the scores below:

Camera
The G3 is the first smartphone to feature laser-assisted auto-focus mechanism. In this system, laser beams are fired from the camera assembly. These beams bounce off the objects and come back towards the camera. That's similar to how SONAR (SOund Navigation And Ranging) works. Calculating the return time, the camera figures out how far the object is. The use of lasers, make the focusing very fast. Plus, LG is the only Android manufacturer to offer proper OIS (Optical Image Stabilisation) system. Thanks to all these features, the G3 is quick to lock focus. Plus, it produces crisp shots with accurate colours. In proper lighting conditions, it beats any Android handset from a major manufacturer. For full blown images, click the following hyperlinks: Sample 1, Sample 2, Sample 3. The only downer here is that the G3 offer very few camera modes and manual settings. It also does a decent job in low-light, but that's still nowhere near the Lumia 925. To get the idea of what I'm on about, check out the image below: The G3 records 2160p quality videos at 30 fps. The clips offer amazing details and accurate colours. Plus, the video playback turns out to be quite smooth.

Multimedia
The G3 offers impressive sound output. The earphones were missing in the review package, but it sounded excellent with Sony's MDR-EX57SL. The handset's video player is packed with features. It supports most video formats including MP4, DivX, XviD, and MKV out-of-the-box. You can even zoom into videos with pinch gesture. Undoubtedly, the 5.5-inch screen turns out to be brilliant for watching movies. Telephone And Messaging
The LG G3's network reception was spotless. the in-call voice quality was good too. Moving on to messaging, the on-screen keyboard is responsive. Thanks to a 5.5-inch screen, the keys are well-spaced. Lg also gives an option to stretch the keyboard size as you like.

Battery Life
The LG G3's 3000 mAh battery powers the device for over a day and half. In our 720 video loop test, it lasted for more than 10 hours. To put things in perspective, the GALAXY S5 lasted for 11 hours in the same test. So overall, the G3's performance is quite good.

Verdict
The LG G3 is a powerful Android device with a great screen. It may not beat the HTC One (M8) in terms of design, but is definitely better looking than the Samsung GALAXY S5. It also offers the best camera Android camp has to offer in India. All in all, it's a very good alternative to the Samsung GALAXY S5, unless you're looking for an element-proof flagship.