Not the poor man's iPhone we've been waiting for. 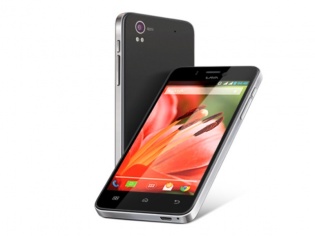 After cracking the entry-level smartphone market LAVA is now targeting the mid-range segment with the Iris Pro 30. Priced at Rs 15,500, this smartphones promises premium build. On the specs front, you get a quad-core 1.2 GHz MediaTek chipset, 4.7-inch IPS screen with HD resolution, and an 8 megapixel camera with BSI sensor and dual-LED flash.

Design
The Iris Pro 30 is yet another iPhone wannabe from the Sino-Indian companies. You can’t complain about its aesthetics because it’s a straight rip off of the iPhone 5. At 7.5 mm, the handset is impressively thin. LAVA has done a great job at keeping the phone’s weight down to only 114 grams. The phone’s fit and finish is quite good compared to other handsets from domestic manufacturers. However, it’s nowhere near the quality and attention you get with the similarly priced Nokia Lumia 720. Like every other budget phone in this category, the Iris Pro 30 comes with a removable back-panel. The phone comes with two SIM slots — one normal and one micro-SIM. The Lock button and Volume Rocker are placed on the right side. Since these keys are very close to each other, you end up locking your phone while increasing the volume. Display And Specs
The phone sports a 4.7" HD IPS screen. With 1280×720 pixels, the display is very sharp. The colours look vibrant. Since it’s an IPS panel, the viewing angles are impressive. For scratch-resistance, LAVA has opted for Corning’s Gorilla Glass. The sunlight readability is mediocre. That said though, the screen is great considering the phone’s price tag.

Software And Performance
The phone comes with Android Android 4.2.2 (Jelly Bean). The company hasn't made much aesthetical change to the stock ROM. The menu screen has four tabs — Main, Apps, Games, and Widgets. Swiping down on a homescreen to bring up the notification bar. Similarly, you can swipe up with two fingers for settings panel that contains Wi-Fi, Bluetooth, auto rotation toggles. The transition effects and even icons are similar to what you get on Nexus devices. The phone operates smoothly during the menu navigation. LAVA has also thrown in a few gesture controls such as accelerometer-based smart answering, direct calling, and flip to mute. However, it stutters badly while scrolling the call log and phonebook. After this we tried factory reset and started with a clean slate. However, the problem was still there.

Coming to the subject of gaming, titles such as Temple Run 2 and Angry Birds: Star Wars covered, Dead Trigger are covered. The phone clocks in 13,565 in AnTuTu. In Quadrant, the Pro 30 scored 3967. These scores are pretty standard for phones in this price tag since most of them are powered by the same MT6589 SoC. Multimedia And Camera
The phone’s music sound quality is great. The bundled IEMs are quite good too. Speaking of video playback, the phone can handle most 1080p files out of the box. In case if any video format doesn’t work, you can grab the MX Player.

The onboard 8 megapixel camera does a good job in well-lit conditions. There’s nothing to complain about the amount of details, but colours look a little washed out. Although the phone claims to have Back Side Illumination (BSI) sensor, the low-light shots are disappointing. Moving on to video recording capabilities, the handset can record full-HD videos. The video quality is good considering the phone’s price.

Battery
The 2000 mAh Li-Ion battery easily lasts more than a day and half. LAVA claims that its Advanced CABC (Content Adaptive Backlight Control) powered battery that lasts 30% more than conventional batteries. I wouldn’t say it lasts 30% longer than the similarly priced phones, but yes it does perform better than most phones.

Verdict
Copied or not, the Iris Pro 30 looks good. It has very good display and multimedia support. The battery life is better than most Android phones. On the other hand, its camera doesn’t live up to the hype. What’s worse is that the Iris Pro 30 is a “smartphone” that struggles with a phonebook. That’s a reason enough why can’t recommend this handset. If you’re looking for stylish device with premium build, go for the Lumia 720. On the other hand, if you’re looking for an Android that performs great at this price tag, the XOLO Play T1000 is still your best bet.