A fitting end to a fine franchise. 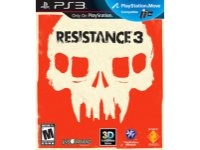 
Popular PS3-exclusive shooters such as Resistance and Killzone use alien invasions as their premise. After the disappointing Helghan drama last year, the third iteration in the Resistance series must rise to the challenge of carrying the FPS banner on Sony's console.

Resistance 3 continues the intense action from its predecessors, while refining the story with InFamous 2-styled cutscenes. Unlike the previous iterations that had humanity at the brink of extinction, this one beats back the invading Chimeran forces to hell, and how! The title even does away with the loose ends of the plot and bad physics that marred Resistance 2.

Resistance 3 delivers yet again with its diabolical weaponry.

A Vast Improvement
Sequels inevitably call for comparisons. While Resistance 2 looked like a polished version of the original title, the latest instalment is a massive improvement over its predecessor. This is especially true in the context of the single-player campaign. Four years after the events of Resistance 2, the game now stars a new hero fighting for a better life.

As Joseph Capelli, you set out on a long campaign infested with all shapes and forms of Chimera waiting to tear you apart. The creepy boat ride from Oklahoma to Missouri and the memorable VTOL (Vertical Take Off and Landing) flight will give you goosebumps. You'll often find yourself running from one ravaged location to another, but every minute of your frantic quest for survival is engaging.

The excellent game design is evident through memorable battles with the Chimera spread across twenty chapters. Expect to square off against hordes of Hybrids, Steelheads, Longlegs, Stalkers, and other alien scum. The game even throws in the perfunctory stealth segments.

The Chimera forces are uglier and meaner than ever.

Be it run-and-gun gameplay, stealthy ambushes, or boss battles - the game delivers every combat experience within its play time of 10 hours. Sure, these battles may be borrowed from other popular franchises, but the action never gets stale or repetitive.


All Locked And Loaded!
With Resistance 3, Insomniac Games has struck a fine balance between all-out action and an emotional narrative. In this respect, the game surpasses its forerunners at almost every level. Added to that, the fun of killing the Chimera with crazy weapons makes this a compelling and fierce shooter. While the classic Auger and Bullseye still serve as your staple alien busters, the Chimeran Deadeye and Atomizer add that extra punch you've been looking for. Weapon upgrades are equally crazy, automatically being achieved as you spray bullets from the assortment of guns. Additionally, everything in your arsenal features a distinct secondary fire.

Yes, you are supposed to kill that.

The variety of fights in the single-player mode are complemented well by the online multiplayer and co-operative modes. Unfortunately, the number of players in multiplayer has been trimmed down from 60 to 16. Just don't expect this to be a Battlefield and you'll do just fine. The newly-introduced abilities and multitude of weapons makes killing random strangers over the internet as exciting as ever. You can earn skill points after every level to upgrade your weapons and abilities.

Two player co-op mode allows you to pair with another player via PSN, or preferably a friend by your side, for tightly-paced offline play. Joseph's brother John Capelli plays Luigi in this mode.

Kickass Graphics
Visually, the game captures the ruins of a civilisation pushed to the brink. Bleak environments and dilapidated structures have been made convincingly dark and foreboding. While the character animation is top-notch, voice acting builds up the story like a storm on a rainy day. The cutscenes rendered by the game engine have been done exceptionally well, and as mentioned previously, are quite reminiscent of InFamous 2.

Resistance Isn't Futile!
Overall, Resistance 3 lacks innovation in level design, as a number of missions bring along a sense of déjà vu. Nonetheless, it will go down as one of the finest games in Insomniac's portfolio. It features an engrossing single-player campaign, intertwined with a fine emotional tale that first-person shooters rarely manage to narrate. Its wide array of weapons and exciting firefights keeps you entertained throughout. The multiplayer mode is an appetizing garnishing on this intense and enjoyable experience.