Too expensive for the performance offered. 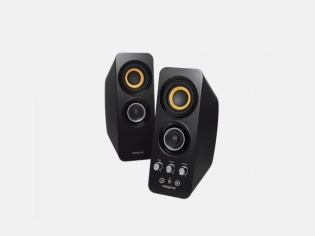 There's a problem with the Creative T30 Wireless speakers right off the bat. If you clicked on this review assuming the speakers are wireless as the name suggests, you're in for a disappointment. These stereo speakers have a total of three wires (power, audio, and inter-channel) running between them and the audio source. The wireless bit here points to their NFC-enabled Bluetooth audio streaming capability. This is pretty much what differentiates it from its well-known T20 and T40 cousins. The T30 is essentially the older T20 with a Bluetooth radio and NFC capability.

Design and Build Quality
Like the T20, the T30 bears a trapezoidal speaker enclosure designed with a mix of rounded and sharp edges. The overall build and material quality is frankly lacking, considering its asking price. A few raps on the speaker enclosure reveal its lack of rigidity and hollow tonal signature. These symptoms are generally absent in well braced wood and high-quality plastic cabinets, which is a bare minimum at this price range. The front fascia is virtually unchanged save for the exclusion of an auxiliary input jack to make way for the Power and dedicated Bluetooth pairing button. Both buttons now flank a lone 3.5 mm headphone jack. The three identical knobs are meant for bass, treble, and volume adjustment. A slightly larger volume control knob, or rather some tactile/visual differentiation, would have been welcome. It's easy to inadvertently turn the dial for bass when adjusting the volume.

This is a non-issue compared to the annoying auto-power off feature that simply switches off the speakers after few minutes of inactivity. I have lost count of the times when I have patiently waited through the first 15 seconds of a YouTube video waiting for the audio to fade in, only to realise that the speaker has imperceptibly switched itself off. It really makes me want to Falcon Punch the eco-zealot that enforced this "feature" without an option to turn it off.

Visually, the T30 may seem to be a photocopy of the T20, but there are some differences between the two. Unlike the T20, the T30 hasn't been positioned in the high-fidelity GigaWorks marque. It may possess the same two-way design of the T20, but the drivers are different. The T30's silk dome tweeter is marked by a pronounced waveguide, whereas the glass-fibre cone woofer lacks the dome-like dust cap design of the predecessor.

Performance
How does the T30 compare to the T20, you ask? Unfortunately, since I don't have the older model at hand, I can't possibly tell you the difference. However, what I can tell you is how it fares against the similarly priced Audio Engine A2 and the Harman Kardon Soundstick III, which has an identical MRP of Rs 13,000, but it's available at most places for Rs 8,000 and thereabouts. 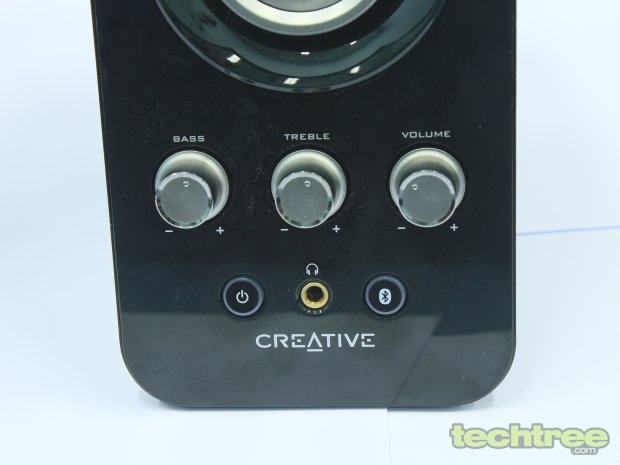 To cut a long story short, the T30 is nowhere near as impressive as the Audioengine A2. Let's just say that it will take considerable head trauma to convince me to pick up the Creative T30 over the A2. Even the substantially cheaper Harman Kardon Soundstick III sounds better and louder to boot. It isn't just about loudness. The T30 definitely makes more noise than the Audioengine A2, but noise is the key word here. The Audioengine holds its sound integrity for a much higher volume than the Creative speakers.

A flagrantly cheap speaker enclosure is one of the main reasons for the T30's mediocrity. The lack of rigidity tells in the low-end performance. The bass is loose, boomy, and imprecise. Mind you, when I say loose, it's loose for a speaker priced at Rs 13,000. This was evident when I played back bass-heavy tracks ranging from E S Posthumus to Prodigy. Quite disappointing, if you ask me. You could be happy with the T30, but when a pure stereo speaker system cannot deliver tighter, more focussed bass than the cheaper 2.1 Soundstick III, why pay more at all? The Soundsticks are a better choice because they deliver bass extension needed for movies and games, while also sounding relatively better in music as well.

I fail to understand why the tweeter has been placed below the woofer. I could have understood if Creative had opted for a D'Appolito arrangement. Doing so on a two-way desktop speaker is just plain wrong. Why? Because higher frequencies are extremely directional, the tweeter must be positioned to fire directly at the listener's ear. The T30 does incorporate a cabinet with a 10-degree inclination for that purpose. Unfortunately, that only ends up pointing the tweeters at my kidneys. The last time I checked, kidneys play no part in increasing the accuracy of soundstage and imaging.

The silk dome tweeters have a warm tonality for the most part, but they lose their tonal integrity as you pump up the volume. This points to a weak amplifier—a fact that was verified when put to the test with some Western Classical recordings with heavy transients. It's a pity, because the tweeters themselves don't seem to be bad at all, but severely limited by the inbuilt amp. When I say warm, that's another way of saying that the highs are rolled off. Don't expect these to deliver the kind of sparkle to the highs that your autorickshaw driver swears by. I would have liked a bit more detail from them, but at least the soundstage is pretty large and the imaging is good enough as well. Not Worth The Price
When compared to both the Audioengine A2 and Harman Kardon Soundstick III, the Creative T30 is more sensitive to the source. The latter two play well with crappy onboard sound hardware, but the T30 sounds especially ordinary without a dedicated sound card. The sound quality, however, improved drastically when I hooked it up to an outboard USB DAC/sound card. Make sure you own a dedicated sound card if you plan to buy these.

But you shouldn't, because you have one vastly superior option (Audioengine) at the same price, and an all-rounder (Harman Kardon) that does movies as well as music well for much cheaper. The only case the Creative T30 makes for itself is its support for Bluetooth playback. It's a great feature that's quite useful for a house party. However, if you primarily seek a desktop speaker for music and movies, the T30 just doesn't cut it. Not at this price.