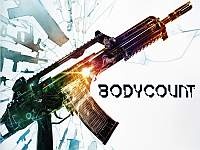 
When Bodycount was revealed on the cover of OXM UK in early 2010, it was dubbed as "the ultimate shooter". We didn't share OXM's enthusiasm in our hands-on last August though. Playing the game in its entirety didn't change anything either.

Bodycount puts you into the shoes of a Ramboesque one-man-army American soldier, minus the muscles and steroids. As a member of a clandestine organization named The Network, you are assigned the task of taking down a terrorist outfit, unimaginatively dubbed The Target. Here onwards, it's a race for the game to prove its FPS worth.

From One Random Mission To Another
Bodycount treads off the beaten path with its choice of combat zones. Instead of the staple US and Russian battlegrounds, combat spans across parts of Africa and Asia. The game puts you in the heat of battle from the word go. With bullets raining down from every corner of the screen, going trigger happy comes naturally. The single-player campaign lasts around 6-7 hours.

You progress from one random mission to another, interrupted by the odd cutscene. The game utterly fails to explain how each mission ties in with the complete picture. Thanks to the limited number of maps, you end up running back and forth through unimaginative missions. There are a total of 10 guns in all, but you can only carry two at a time. A major problem with this setup is that not all weapons yield similar results. The SMG, for example, is a good all-round gun, but the silenced pistol is a complete downer.

Expect to see a lot of this.

Artificial Unintelligence
There is a difference between slaying someone for a reason and mindless carnage, even when playing a video game. In this war between the supposed world-savers and so-called terrorists, it doesn't take too long before the narrative starts falling apart. The typical rescue-the-world premise soon boils down to an all-you-can-shoot buffet, as you kill without any rhyme or reason.

One the bright side, you do get to blow nearly everything to hell. The semi-destructible environments let you shoot opponents through doors and walls. Then again, this is a short-lived joy, thanks to incompetent AI opponents. I mean, there were times when I could just walk past them with impunity.

Things I Learnt From Bodycount: Warpaint works better than kevlar.

The scoring system may seem a little tricky at first, but it generously doles out multiple rewards further in the game. There's plenty of room to move around in the maps and line up shots with precision. This freedom is leveraged to reward Skillshots involving headshots, grenades, and landmines.

In a bid to extend variety on the platter, the game encompasses an online multiplayer and Bodycount Mode. Both these modes are far from satisfactory. However, the only silver lining is that this time your opponents have a mind of their own. Fortunately, the Deathmatch and Team Deathmatch modes let you to make the most of the Campaign Mode upgrades.

Glorious Carnage!
Despite its several inadequacies, the game stands out with its over-the-top shooting sequences. Hit a canister and watch it explode along with the vermin around it. Witnessing bullets shred the scenery to pieces with great attention to detail is a sight to behold. On the flip side, while opponents bleed, bullets never penetrate into their skin or tear the flesh apart.

Although Bodycount is no Battlefield 3, it features decent graphics. The in-game environments boast of minute details that recreate the look and feel of African and Asian battlegrounds. The game conveys the rusticity of West Africa as well as the sophistication of the futuristic Target bases. In terms of acoustics, the game features decent foley work that lends to believable gunfire and explosions.

If only visuals could compensate for bad design...

A Lost Opportunity
Bodycount does a few things right, but its shortcomings are too conspicuous to ignore. For the demanding FPS veteran, it barely offers a challenge. Repetitive missions, short gameplay, minimal innovation, and limited number of maps and guns overshadow its colourful graphics and fun skillshots mechanics.