A trendy looking quad-core Android handset with an impressive 5" screen. 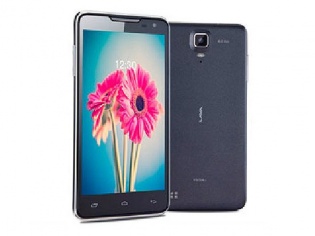 Similar to the recently reviewed Zen Ultrafone 701HD, the LAVA Iris 504Q is yet another contender to challenge the popular Micromax Canvas 116 HD. Just like it's competitor, LAVA’s phone packs in a quad-core processor, 5" HD screen, and dual-SIM functionality. On the software front, you get Android 4.2.1 (Jelly Bean). Although these handsets seem very similar on paper, let's find out if the Iris 504Q can make a difference with its aesthetics and performance.

Design And Build Quality
What quickly sets the Iris 504Q apart from a pool of budget 5-inchers is its sleek design. The front of the device looks very much like the pricier Panasonic P51. The edge-to-edge glass provides a premium touch to the handset. At 8.4 mm, it's significantly slimmer than its competitors. The slightly curved back-panel makes the phone look stylish. Moreover, its soft-touch matte finish helps with the grip. That said, it's still not ideal for single handed usage like most phones with 5" screens. If you're a fan of flip-covers, no need to shell out extra money since it's already a part of the retail package. For menu navigation, the phone features three capacitive navigation keys – Home, Back, and Options. These keys placed below the screen are backlit, and offer haptic feedback when pressed. On the left side, the handset sports a volume rocker. On the opposite side, there's Lock/Power button. Finally, the top of the device houses a 3.5 mm jack and a micro-USB port. To complement the design language, LAVA has gone with minimal branding — everything from the company name to megapixel count has been printed in a small and easy-on-eyes fonts. Display
The Iris 504Q sports a 5" IPS screen with pixel dimensions of 720x1280. The display uses OGS (One Glass Solution) technology that eliminates the space between your display and touchscreen, allowing you to almost touch what's on your display. The screen is crisp and delivers vibrant colours. Considering the phone's price tag, the contrast is good too. The viewing angles are wide, but the sunlight legibility is just about ok. The screen isn't covered by scratch resistant glass, therefore, it's advisable to opt for a good quality scratch guard.

Basic Specs
The phone is powered by a 1.2 GHz quad-core processor based on the Mediatek MT6589 SOC. There's 1 GB of RAM to help with multitasking. Other than that, you get 4 GB of internal storage (1.7 GB user accessible), microSD card slot, Wi-Fi, Bluetooth 3.0, 3G, and 2000 mAh battery. Detailed tech specs are given at the end of this review.

UI And Apps
The Iris 504Q features Android 4.2.1 (Jelly Bean) out of the box. LAVA hasn't made any aesthetical change to the stock ROM. The menu screen has four tabs namely Main, Apps, Games, and Widgets. Swiping down on a homescreen to bring up the notification bar. Similarly, you can swipe up with two fingers for settings panel that contains Wi-Fi, Bluetooth, auto rotation toggles. The icons and even transition effects look exactly like what we've seen on the Nexus devices.

Taking a cue from the top-end Samsung GALAXY S4, LAVA has introduced a few gesture controls. With a swipe of your hand (without touching the screen), you can change tracks, and browse pictures gallery. These aren't very useful, but fun additions nonetheless. Generally, the user interface remains quite responsive. However, it does slow-down a bit some times. But then, that's very much expected on a budget Android device. Coming to the subject of gaming, you'll be able to play casual games such as Temple Run 2 without any issue. Modern Combat 2, Dead Trigger, and Shadowgun are also compatible, but the frame-rates aren't that great. In AnTuTu, the device hit the 12964 mark, which is standard for a budget quad-core Android handset. To put things in perspective, the recently reviewed Zen Ultrafone 701HD had an almost similar score of 12992.

Multimedia
The default music player's interface is basic, but has got equaliser settings covered. The sound quality is very good, but you need buy a good pair of earphones to enjoy that. Yes, the bundled IEMs are bad. Moving on to video playback, the default player doesn't support many formats. However, you can overcome this limitation by installing a good third-party app such as MXPlayer. 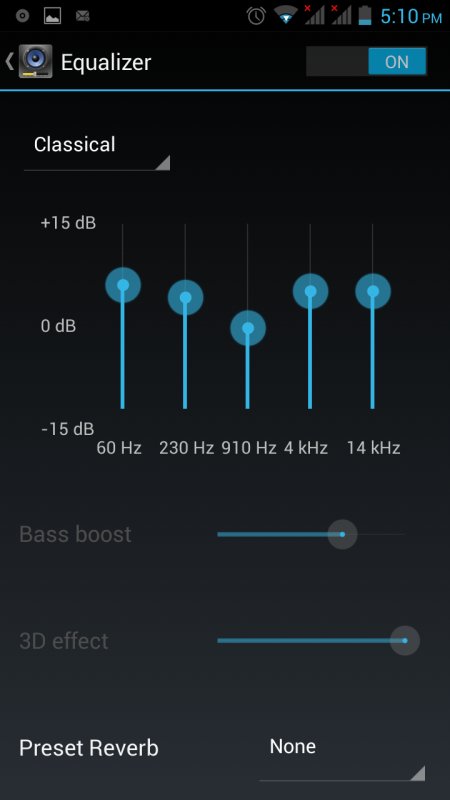 The phone comes with an 8 megapixel auto-focus camera with LED flash. As usual, the camera offers quite a few settings including white balance, exposure, and saturation. Then there are various modes that include Normal, face beauty, HDR, panorama, and multi-angle. The aforementioned gestures also work in the camera UI. You can click photos by swiping your hand near the proximity sensor. It can become quite annoying at times when you want to access camera settings situated near the edge of the screen, and the phone starts clicking pictures. Thankfully, you can turn off the gesture recognition.

While the snapper is full of bells and whistles, it disappoints with the most basic aspect — image quality. It offer natural colours, but badly misses out on details. And despite the much-hyped BSI sensor, the the images turn out to be unusually dark and grainy in the low-light situations.

Moving on to video recording capabilities, the handset can record 1080p videos. The clips are saved in 3GP format. Similar to the still images, the videos lack details.

Telephony And Messaging
Like any other dual-SIM (GSM) phone, the Iris Q504 features a SIM management menu. The handset's network reception and call quality is pretty good. On the messaging front, the on-screen keyboard is quite responsive.

Battery
The 2000 mAh battery easily lasts for more than a day with standard usage. In our video loop test, it managed to power the device for almost 5 hours. For a 5" quad-core Android phone, I think the battery's performance is good enough.

Verdict
The LAVA Iris 504Q stands out because of its vivid and sharp IPS display. The quad-core processor has been put to good use as the latest Jelly Bean 4.2 OS runs quite smoothly on this device. There are a few gesture controls borrowed from the GALAXY S4, which add more to this budget handset's flaunt-value than utility. Aimed to please the Indian consumer, the phone comes with dual-SIM functionality. The build quality is solid, and its curved back is a nice design touch. On the flipside, the camera is mediocre and there are occasional performance hiccups. But all in all, the Iris 504 has struck a fine balance between cost and features. For a street price of Rs 13,500, it is set to give the Micromax Canvas HD a run for its money.