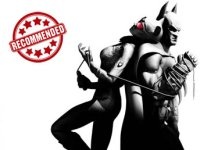 
When everyone seems to have an opinion about a game, it's difficult to play it without a bias. Especially when its predecessor has set definitive standards in a genre that could do with some more innovation. In Arkham City, Rocksteady has added to the experience of the first title with intense gameplay, hi-tech gizmos, superior graphics, and a larger arena.

In the second outing, the confines of Arkham Asylum break down to encompass an entire section of Gotham City, which has been cordoned off and created into a penal colony called Arkham City. As Batman navigates through the twists in the storyline and combats the line-up of villains, you discover the power of the man behind the mask, and what drives our superhero.

Telling The Tale
The opening sequence hits the right chord as the plot flows into a bustling theatre of adventure. A few minutes into the plot and Bruce Wayne finds himself a captive of the game's villain, Dr Hugo Strange. After you are set free to deal with the insanity of the city, you don the Dark Knight's suit in an attempt to unearth Strange's masterplan for the city. Soon enough, the number of gadgets multiply, as does the intricacy of every task. There are numerous challenges (and side-quests), each with a twist in a tale that then come together for the bigger picture to emerge.

The title smartly draws influences from the comic books and movies, then combines them with the development team's ingenuity to flesh out the game's characters. This isn't restricted to Batman alone - Arkham City captures Harley Quinn's eccentricity, the Joker's madness, and Catwoman's seductive nature to the hilt.

A face-off with Two Face.

The developer has managed to exceed expectations by bringing together the varied characters and plot into an engaging mix of stealthy action. Going by the way it develops, this iteration doesn't seem anything less than a movie. Cutscenes blend well with the gameplay and barely feel unwanted. Some of them are quite long, but you can always skip them to plunge into the next fight.

They say too many crooks spoil the broth. At first glance, the roster of villains in this instalment could well stir a bout of confusion about the plot. I mean, how can the Penguin and Joker and Two Face team up to beat Batman? The answer: they don't. The only thing they share in common is their feeling of reprisal against our superhero. Each adversary offers distinct challenges that add up to 12-15 hours of gameplay, taking the storyline to a concrete conclusion (how much ever tricky that may be).

There are two protagonists in the game: Batman and the gameplay. The latter is significantly better than that in Arkham Asylum. Gotham's protector is still his usual self though. He walks the way he did in the last, has the same guy (Kevin Conroy) voicing for him, and makes the toughest tasks look like a walk in the park. The difference lies in the approach of the gameplay, which presents an improved combination of stealth and strategy.

Given the fact that about half a dozen villains make their presence felt, there is no dearth of variety in terms of boss fights. In contrast, their minions are nothing more than punching bags. Which is a good thing, because the best part of the game is that it doesn't leave you frustrated at any point during your battles. Moreover, the side-missions (with the exception of Augmented Reality Training) add to the excitement of taking down crooks.

Sneaking up on thugs is pure fun.

The Riddler Trophies spread across the city pose unique challenges. The good part is that the game allows you to complete each riddle without losing focus from the main objective. You also get to use the umpteen numbers of gadgets right from the very start. The Cryptographic Sequencer is one gadget that could sell like hot cakes in the real world.

The abundance doesn't stop just at the advanced gizmos. The available combat moves have been greatly increased from the previous outing, leaving you with more than enough options to choose from. An attack combo, coupled with a slew of gizmos, can unleash panic among the baddies. It also helps gain XPs to the extent that you wouldn't want to circumvent a single battle.

The other prominent element is the game's Detective Mode. Once you turn it on, nothing remains concealed from your glance. Be it an enemy's position behind a wall or dead skeletons under an ice pool, it reveals all that your normal vision does not catch. Increasing the list of plus points, the New Game Plus feature (though not exactly new) is a good way of preserving your previous games while starting all over again at another level of difficulty.

While there is so much to go gaga over this chapter, it has a gap that can't really be filled. You can't play as Catwoman without a redeemable coupon that is supposed to ship with the retail copy, but has been found missing in many cases. The only other way to activate her as a playable character is by downloading the DLC from Xbox LIVE for 800 points. Unlike PS3-exclusive The Sly Trilogy, the game forces you to pay up for getting to use extra characters. You can don the suits of Robin and Nightwing too, but only with the purchase of two other DLC packs.

Catwoman at her best!

Music And Graphics
Arkham City is nothing like Gotham. Unlike Wayne's sophisticated hometown, it's been carved out of the slums, replete with baddies out to prove their supremacy. However, the setting doesn't exactly make for great viewing due to the dull colours and dreary buildings. Fortunately, the character animation is of a superior quality and gives little reason to sulk over. Meanwhile, the audio defines fear in a completely different way. It's Not Even Breakfast and Let's Hear Him Squeal will stick to your brain like a magnet on an iron board. In addition, Kevin Conroy's voice acting is matched with equal conviction in Grey DeLeslie's Catwoman, Tara Strong's Harley Quinn, and Mark Hamill's Joker. The dialogues are also impressive for the most part, with their comic-book tone and texture.

With this title, Rocksteady has brought the fun of being a lonesome vigilante to the table in a more enjoyable manner. Arkham City's tight pace makes it a thoroughly entertaining production that sets new standards in the genre. Some minor issues continue to persist, but when you get into the groove, all niggles fade into the background. Play this game if you want to know what it's like to strike terror in your enemies with the mere mention of the name "Batman".