A smartphone living in the shadow of its sibling. 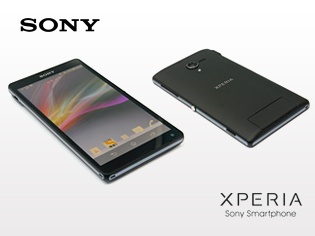 Sony's flagship Android handset, Xperia Z garnered a positive response from the market. While water and dirt resistance were good features to have, not everyone wanted to pay a premium for that. At least that's what Sony's head-honchos had in mind when they rolled out the Xperia ZL. The handset packs in the same innards as the Z, but lacks the outer protective shell. So will the ZL manage to grab some eyeballs, or live in the shadow of its sibling forever? Let’s find out.

Design And Build Quality
The Xperia ZL is designed in such a way that the display gets most of the attention. For that, the company has done away with capacitive menu keys and shrunk the bezels. Similar to the Nokia N9, the front-facing camera has been placed on the bottom right corner of the screen. One nice touch here is an illuminated transparent strip placed at the bottom of the screen. It notifies you about the events such as new messages and missed calls.

A volume rocker, camera shutter, and lock button are placed on the right side. The micro-USB port sits on the left, while there's a 3.5 mm jack on the top. The designers have slapped faux-metal strips on all four sides, which hamper the aesthetics of the phone. And if that wasn’t bad enough, an unpleasant textured-pattern has been added to the back of the device. I know, it helps with the grip, but then the soft-touch finish would have been a much better option. Like every other large screen phone (yes, phablet, if you must), the ZL is not ideal for single-handed use. Especially, pulling down a notification bar is a punishment for your thumb because of the large screen size. Although the phone has multiple seams, the battery is not user-accessible. The microSD card and SIM slots are placed under a flap cover, which is not only flimsy but also an eyesore. Overall, considering its price tag the handset doesn't have a premium feel to it. In comparison, its last year's line-up that included Xperia S and SL had a much better design language. In terms of build quality, this handset isn't IP57 certified like the Z, meaning that it isn’t dust or water resistent. While the phone feels quite sturdy, it won't be too long before one of those faux-metal strips starts losing its finish. Display And Specs
The phone comes with a 5" screen boasting of Sony's Mobile BRAVIA Engine 2. With pixel dimensions of 1080x1920 pixels the screen is sharp, but your eyes just can't tell the difference between this, and a 720p screen on a 5" display. The brightness is good enough, but the colours look a little washed out. Another annoyance is that the whites don’t look accurate, they look a bit yellowish. So rather than the higher pixel-density, Sony should have delivered better colour reproduction and contrast. Sony's handheld gaming console PS Vita sports an excellent OLED screen. I wonder what stops them from using those panels for high-end phones. For screen protection Sony has used a toughened glass. However, it's not the Corning Gorilla Glass, which is widely regarded as best in the business.

In terms of hardware, the Xperia ZL is one of the most powerful handsets in the market. It features a quad-core Snapdragon S4 chipset clocked at 1.5 GHz, and there's 2 GB of RAM. For photography you get a 13 megapixel auto-focus camera with Exmor RS sensor and LED flash, 16 GB internal storage, microSD card slot, and 2370 mAh battery. Detailed specs are at the end of this article.

OS and Apps
The Xperia ZL features Android 4.1 (Jelly Bean) heavily customized by the manufacturer. The new lock screen features a nice unlock animation that mimics the window blinds. It features quick shortcuts for music player and camera. Beyond that though, I personally didn't find the interface to be aesthetically pleasing. Sony hasn't even bothered to maintain uniformity in icons. As you can see from the screenshot below, a few icons are rectangular; some are round, while the rest have nothing in common. Since the phone lacks physical buttons, the menu navigation is taken care of by onscreen buttons. Taking inspiration from Samsung's TouchWiz, Sony has added toggle buttons for Wi-Fi, Bluetooth, and silent mode in the notification area. The phone offers "small apps" feature that allows you to use calculator, recorder, timer etc in windowed mode. For instance, you can take notes while playing a video in the background. Interesting concept, but I doubt if many will find it useful. Pressing the Home button for a long time brings up Google Now. This feature is supposed to deliver all the relevant information in one place. However, at least in India, it does nothing, but returns search results.

Thanks to its powerful processor, the interface remains quick most of the times. Graphics intensive games such as Dead Trigger run without a hitch. The ZL comes with Google Chrome instead of the default browser. Its page rendering speeds are impressive. The tabs are supported, but Adobe Flash is a no-go. In AnTutu benchmark, the Xperia ZL scored 20,660. It's not far off from the recently reviewed HTC One's 23,412. Overall, there's nothing to complain about the phone's performance, but the interface leaves a lot to be desired. Multimedia
The default music player (Walkman) offers easy to use interface. As expected from a premium handset, the sound quality is very good. There are several equaliser presets, and surround sound modes to play around with. Another thing worth mentioning is ClearAudio+ enhancement, which adjusts the output based on the song that you're listening to. It works very well with the bundled earphones (Sony MH-EX300AP).

Coming to the subject of video playback, the ZL managed to handle everything including MP4, DivX, XviD, and MKV. One small annoyance here is that it doesn't support AC3 audio format. However, you can easily overcome this issue by grabbing a third-party app such as MXPlayer.

Similar to HTC One, the Xperia ZL features a built-in IR port. Using manual key mapping, you can make it work on most TVs, home theatres, and cable set-top boxes. Needless to say, it's a helpful feature that's quite fun to use.

Camera
The ZL's 13 megapixel camera sports a much-hyped Exmor RS sensor. The snapper offers multiple modes including normal, Superior auto, burst, Picture effect, and Sweep panorama. The Superior auto mode comes to the rescue when you're not sure when to activate night mode or HDR. The handset's camera UI gives access to the shutter button and camcorder at the same time, which means you can snap a picture while recording a video. However, the snaps taken while recording clips are capped at just 1 megapixel.

The full-blown photographs offer good colour reproduction, save for the slightly overexposed whites. The noise reduction algorithm is quite aggressive, which spoils the details. Click here to view the untouched camera sample. The low-light photography is nothing to writing home about, as those snaps turn out to be outrageously grainy. Still, I'd say that in well-lit environments the results are better than HTC's "UltraPixel" camera. The phone can record full HD videos at 30 fps. The clips are saved in MP4 format, and offer consistent frame-rate. The ZL is one of the few handsets to record 1080p videos with HDR. However, it doesn't significantly improve the video quality.

Telephony And Messaging
The handset's call quality and signal reception during the tests were good. There was no issue with Wi-Fi, Bluetooth, and 3G reception either. The phonebook swipes sideways to offer options like dialler, favourites, and groups. If the contacts list gets crowded, you can purge them using various filters. After using it for a week, I feel that the onscreen keyboard could have used a better design. There's too much space left between two adjacent characters. That said, it's difficult to hit a wrong key on a 5-incher. Battery And Verdict
The 2370 mAh Li-Ion battery provides sufficient juice for it to last a normal work day. In our video loop test, it managed to power the device for only 5 hours and 30 minutes. That's disappointing considering the HTC One managed to clock 10 hours with almost similar battery capacity.

The Xperia ZL's sound quality and performance are very good. On the flipside, the screen is just about average. Priced at Rs 34,900, the handset lacks flaunt value. So unless Sony brings its price under 30k mark, the ZL is going to be a hard sell. And if you're planning to spend around 35k, then it makes sense to shell out Rs 3000 more and go for the Xperia Z instead. Those willing to look beyond Android can also consider Nokia Lumia 920, which costs Rs 35,500 including a wireless (induction) charger and sports one of the best smartphone cameras ever.