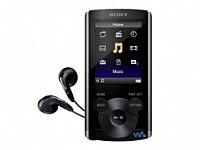 
Personal Media Players (PMP) and point-and-shoot cameras have virtually been rendered redundant by the do-it-all smartphones. Nevertheless, I swear by discrete PMPs for my music and video needs. The logic behind my insistence on a decent PMP is clear when you ask yourself why soldiers are outfitted with both a Swiss Army Knife and a combat knife. The answer's simple: when it comes to killing, the former has nothing on the latter.

Therefore, if you are a stickler for audio quality, it's better to leave your smartphone in standby mode and switch to something tailor-made for the task. What better candidate for music than the brand that pioneered portable audio? The Sony Walkman NWZ-E363 carries on the 30 year old legacy of the Walkman brand in a diminutive package capable of audio as well as video playback. Let's see how it measures up to the competition.

In this day and age, I won't be surprised if Disney were to sue Sony over this.

Who Is It Really Meant For?
The E363's form factor is slim, but isn't necessarily small enough for a 4 GB music player. That's because it can play video through its 2" LED-backlit screen capable of 262,144 colours (18-bit), while sporting pixel dimensions of 230x320. Although the PMP can fit without a sweat in the smallest pocket, its size is still a sore point for me. The only reason for its relatively bloated dimensions is the LCD panel, which is neither remarkable in terms of size nor quality. The large screen is rather wasteful if the PMP will be lying around in your pocket most of the time.

One look at the product page puts this dilemma into perspective. The E Series Walkmans are meant for basic video and audio needs, while the more expensive A Series variants feature fancy electronics for enhanced audio fidelity and large OLED screens for better video quality. However, at Rs 7000, the upmarket Walkman alternative is just Rs 2000 dearer for much better hardware. Alternatively, if you just seek basic audio playback, the B Series Walkman is conveniently portable and quite cheap as well at Rs 2500. Having compared the B and E Series Walkmans, I didn't find any noticeable difference in audio quality.

The mediocre screen is a scratch magnet.

There's no point being stuck with a bulky video-capable PMP, when audio capability is all you need. However, it's better to pay a bit more for dedicated video players if you want good video performance. Therefore, weigh your requirements carefully before homing in on the right model.


Design And Build Quality
The material and build quality of the E363 doesn't justify its Rs 5000 asking price. That doesn't mean it will readily snap into two. However, the quality of plastics and the fit and finish levels should have been a lot better. I spotted a worryingly large panel gap that shut when I pressed the chassis alongside its panel seams, only to open again when the pressure was released. The transparent plastic sheet protecting the screen and most of the face is a scratch magnet. This was evident by how the review piece had become worryingly hazy by the time I was done with it. I shudder to think of the LCD screen's visibility a year down the line.

Despite it's 2" screen, the PMP lasted well over 13 hours of continuous usage. That's considerably less than the claimed 30-hour battery life. In all fairness, I had kept the display at the brightest setting, while most of my audio was encoded in 320 kbps. I found the bundled earphones rather large for my ears, but they fit everyone else in the TechTree team without a hitch. However, they are so uncomfortable that your ears will hurt long before you realise how shitty they sound.

You're better off with good in-ear monitors.

The button layout shows promise, with three function buttons arranged in and around the D-pad. However, it is marred by a few awkwardly-placed function keys. The Play \ Pause button and the D-Pad - placed bang in the centre - make for quick navigation and playback control. The BACK \ HOME and OPTIONS \ PWR OFF keys cut through the upper half of the D-pad to resemble Mickey Mouse's head. This clever arrangement keeps all the crucial buttons within thumb's reach for effortless one-handed usage. Unfortunately, Mickey's ears should have been positioned a bit outwards, because those keys tend to foul with the left and right D-pad arrows. I have lost count of the number of times I have inadvertently pressed the ears instead of the L\R D-pad buttons.

The right edge of the PMP is empty, while the left edge bears a volume rocker as well as a slider for the Hold function. The bottom edge hosts a standard 3.5 mm TRS jack and mini-USB port employed for charging and data transfer. Speaking of which, the E363 only supports the MTP (Music Transfer Protocol) mode out of the box, which isn't pretty because it's a DRM-castrated mode that isn't as free as the standard MSC (USB Mass Storage Class) mode found in most PMPs, USB drives, external HDDS, or rather any USB storage device for that matter. Read these two interesting threads to know what I mean.

A Fast And Efficient Interface
The UI is simple, smooth, and lag-free. It may not be as intuitive as Sony's own XMB interface, but the context-sensitive OPTION key brings up just the right functions that you would want to access in any menu. That way, no function is more than a couple of clicks away. The Videos, Music, Photos, and FM Radio shortcuts are arranged in a 3x3 matrix in the main menu, along with dedicated icons for the Clock Display, Playlists, and Settings menu.

The shuffle icon gives quick access to a random songs, while the Now Playing and Shuffle All keys take you directly to the music. Pressing the OPTION key in the Now Playing mode gives quick access to important functions such as playback settings and the five-band graphic equaliser. Flamboyant touch-based UIs may be good for show, but efficient old-school interfaces such as this get the same tasks done much quicker.

Sony's interface trumps that of the SanDisk, but the latter destroys it in audio quality.

Will It Outperform Your Smartphone?
With convergence devices on the rise, it doesn't make sense to evaluate the E363 on its own. It isn't enough to know how good the PMP is, but what needs to be seen is how well it performs against an average smartphone. That's why I pitted it against the Nokia 701 that I have been using for a few weeks now. At Rs 16,800, the 701 isn't really all that expensive by cellphone standards. For that asking price, Nokia has to put in a capacitive touchscreen panel, 1 GHz processor, 512 MB memory, an 8 megapixel camera, and 3G, Wi-Fi and GPS functionality.

Once that is put into perspective, it is clear that Sony's Walkman has a much larger budget to allocate just for music - a luxury beyond Nokia 701's means. The E363 should wear the 701's colon around its ankle then. However, that isn't the case. In fact, it's the other way around. With all audio enhancements switched off, the Nokia digs out a lot more detail than the Sony. The bass is tight and plentiful on the 701, whereas the dedicated PMP sounds anaemic.

The Sony features a five-band equaliser to fix its aural shortcomings, which also includes an additional band dubbed Clear Bass. No matter how much I played around with the equaliser, the E363 couldn't replicate the neutral tonality of the 701. The Clear Bass feature cannot augment the low-end without adversely affecting rest of the audio spectrum. The Sony Walkman then, simply cannot replace your smartphone.


Seriously, Who Is It Really Meant For?
While there is nothing severely wrong with Sony's PMP, it's let down by mediocre audio and video performance. The same money can get you much better dedicated PMPs from SanDisk and Cowon. For about the same price, you can buy an 8 GB SanDisk Sansa Fuze+, while another grand will get you the 16 GB version. Unlike the E363, the Fuze+ supports free and open audio formats such as FLAC and Ogg Vorbis. Audio quality-wise, the SanDisk is light years ahead, although a bit unwieldy due to the dumb capacitance touch interface.

However, if it's music that you're primarily interested in, it doesn't get any better than the SanDisk Sansa Clip+. Read the comments section of our PMP Buyer's Guide to know why the Clip+ humbles considerably more expensive PMPs such as the Cowon J3.

There's no easy way to put this, so I'll cut right to the chase. Considering the fact that it can neither outperform an average smartphone, nor match up to the dedicated PMPs in its price range and below it, there is absolutely no reason why you should buy the Sony Walkman NWZ-E363/B.