As Tywin Lannister would say, “Any man who must say, I am the shadows, is no true shadow.” 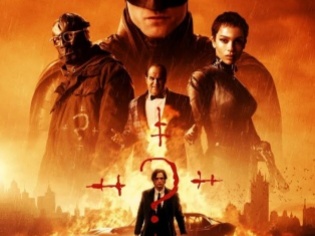 The Batman falls short due to mediocre writing, a stale villain and an unkept promise.

“Fear is a tool. They think I’m hiding in the shadows, watching, waiting to strike, but I am the shadows.” – Batman, The Batman

Here’s Batman claiming how he is one with the shadows, despite the self-admitted fact that crime has gone up since he became Batman two years ago.

Perhaps claiming that you are the shadows would work in a different context, but it didn’t work the way it was presented in the movie.

As Tywin Lannister once told Joffrey, “Any man who must say, I am the king, is no true king.” Well, I believe the same applies to shadows. And vengeance too for that matter (Batman also claims to be vengeance after beating up a gangster in the subway).

Now in the Dark Knight Trilogy, the fight scenes were average to be honest, but at least there were enough fight scenes overall.

But what truly separates Nolan’s Dark Knight trilogy from most movies ever made is the exceptional level of writing. Which brings us to our next quote about shadows:

“Oh, you think darkness is your ally. But you merely adopted the dark; I was born in it, moulded by it. I didn't see the light until I was already a man, by then it was nothing to me but BLINDING! The shadows betray you, because they belong to me!” – Bane, Dark Knight Rises

Personally, I think this quote about shadows is a lot deeper and insightful.

There are as many examples of good writing in the Dark Knight trilogy as there are of bad writing in The Batman, and going through them all would be repetitive so let’s move on.

Batman’s primary antagonist, the Riddler, felt like a Joker copycat.

The Joker’s best appearances have been in The Dark Knight and the movie Joker, and the Riddler felt like a cheap imitation of both.

The Riddler was written as somebody who is crazy, unhinged, insane, and while that’s a fine blueprint for a villain, the Riddler failed to stand out.

Sure, seeing his face near the end of the movie added some depth, but it wasn’t enough.

But at least the Riddler helped Batman grow as a hero. The scene where the Riddler confesses that Batman inspired him was quite revealing, and when one of Riddler’s henchmen says, “I’m vengeance”, Batman finally realizes that it’s not enough to be a symbol of fear, he must also give hope to the people of Gotham.

While the Riddler comes across as a copycat of the Joker, let’s take a look at another character who is as crazy as the Joker: Green Goblin.

The Joker’s whole philosophy is to prove that everyone is one bad day away from becoming like him, but the Green Goblin is different.

The Green Goblin is power hungry. In No Way Home when he finds himself in a new universe, he doesn’t panic, he just looks at the bright side: “A new world to conquer!”

What does the Riddler stand for? Is he all about punishing those who are corrupt and morally bankrupt? That’s what the movie leads you to believe until he senselessly sets off explosions that target innocent civilians.

The Riddler may not be that unique of a villain, but he outsmarted Batman at every turn. Which leads us to the final reason The Batman fell short: This movie wasn’t that good of a detective story.

The Batman broke its promise of being a detective story.

This movie was supposed to prove why Batman is the “World’s Greatest Detective”, but it did not. Why? Because a great detective catches the villain in time, before the villain wreaks a ton of havoc.

Batman did not stop Riddler from killing a single target, except Bruce Wayne of course and that doesn’t really count.

Batman may have solved the clues that the Riddler left behind, but ultimately Batman failed to stop the Riddler from achieving his objective.

Now that doesn’t mean I wanted a happy ending. Some of the best movies out there have the villain coming out on top.

But this movie was supposed to be about a good detective, and while it was interesting to see Batman work out a few clues, there was no twist in the story.

All that detective work didn’t lead to a big payoff or a grand revelation of any sort. There was no big mystery to solve because you knew the Riddler was behind everything, and that’s also why the movie lacked suspense.

The Batman tried to throw a few surprises here and there, like Thomas Wayne having a reporter murdered to protect his wife, and Falcone being Selena’s father, but they fell flat in my opinion.

Though this movie was average, it serves as a good foundation for future movies. I think the casting was great, my favorite being Colin Farrell as the Penguin.

And of course, Robert Pattinson was a great Batman. I have a feeling that by the end of his career, Pattinson will be more known for Batman than Twilight.