This award winner phone is a let down because of its most unique aspect, add-on modules For a couple of years there's been talk of whether phones should be modular. You have the same basic size and shape but you can always carry bits to add to the functions and features.

At the Mobile World Congress this year, LG excited me no end by being the first to come up with this concept in real life and bring it to market. It even got awarded the best phone at the show. It all sounded good -- on paper.

To see the LG G5 in real life though has a few instant disappointments. First: these extra modules are not available for reviewers to see. I suspected they weren't available for customers to see either and called up a few LG stores who could only offer a battery and charging cradle. They did say a camera module could be made available on order.

But LG has advertised and positioned the phone as something you are to "play" with because of the many "Friends" it has. They envisaged a whole ecosystem of add-on modules that snap into the phone when you release and slide out the bottom separatable segment.

There are Friends to add battery booster, B&O hi-if DAC, camera grip with controls, VR gear, and 360-degree camera. But can you even find out what these add to the Rs 54,000 the G5 costs? Not really.

This is a problem not just LG but all devices dabbling with modular design will have to solve if they want to really sell. Easy availability, pricing that doesn't add hugely to the cost of the phone, and easy use. The practical problems of carrying, keeping track of and changing modules has to be factored into the use of the smartphone.

But there's no denying that the G5 is fast and smooth. It works with the Snapdragon 820 processor and 4GB RAM so it isn't surprising. It runs Android Marshmallow but
LG's interface is deeply unexciting and just has no character. On this iteration they've  unnecessarily removed with the app drawer and use on-screen navigation buttons that are most difficult to get used to -- even if that is part of Android.

I tried the G5's fingerprint sensor on the back of the phone. I had to forget it because it wouldn't get past accepting my fingerprint even after repeated tries with more than one finger.

If there's one thing exciting about the G5 it's the 16MP camera though if you're paying that much why wouldn't you just consider the Galaxy S7 and the iPhone 6s which have both been through enough to tests and reviews from experts.

The G5's is a good camera and you'll get realistic colour reproduction with detail in good light. The same isn't true of photos in low light. The camera has a wide angle mode with which you can take some excellent and interesting shots and yes, I do wish we had that on other flagships. But would it be a reason for me to pick up the G5 seeing that I'm a confirmed photo enthusiast? Nope. I see the G5 as not fulfilling its promise in many ways, starting with that ecosystem of Friends it's touting so much. 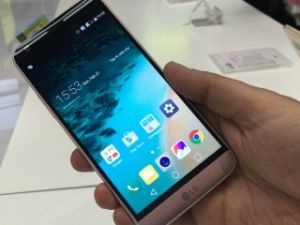 Press a button to release the bottom segment b if the G5. Then, let another module come along for the ride for extra functions

On top of that, the design of this phone isn't stellar making the device look and feel inexpensive -- which it certainly isn't.

There's a beautifully curved glass on the 5.3-inch screen, but from the back, it looks and feels plasticky and ordinary. It has a slide-out removable 2800mAh battery with Quick Charge 3.0.

Lila Ray is a corporate consultant who likes her gadgets almost as much as she likes her shoes. You can write to her at [email protected]