Juggernaut Wants to Get India Reading 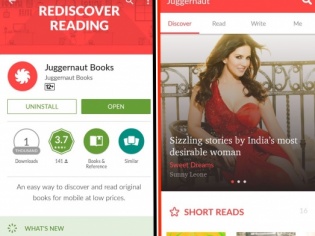 Not everyone is going to get themselves a Kindle or or even the Kindle app with an Amazon account. At least Chiki Sarkar and Durga Raghunath believe so. Last year they launched Juggernaut Books, and now that digital publishing startup has launched a reading-publishing app, available on the Google Play Store for free.

So far, Amazon has had little competition where buying and reading books digitally is concerned. That could change with Juggernaut Books -- and good luck to them, for that.

Here's some advantages the app has: It's dead easy. No lengthy steps to creating an account, no difficulty buying, and no problem using it. It's an easy and light app which logs you in with your Facebook account. If your credit card account is already on Google Play, then just get past the log-in, and you're good to go.

The first thing you'll see, right now, is a big photograph of Sunny Leone. That's her book cover and she's offering sizzling stories every night. If you're up for something racy, that is. Swipe it away, if not, and you'll see the next cover, on Indian Superfoods by Rujuta Diwekar. And the next is on stories from Pakistan.

There are about 150 books to start with from nearly 100 authors, and all of them cost barely a thing, ranging from Rs 49 to Rs 149 and that's its second advantage right there -- it's got totally affordable content.

The app works on both a smartphone and a tablet, though, I thought, a little better on the smartphone.

A huge plus is that it's very intuitive. It's full of features you wouldn't think would fit in, but just look around or double-tap, and you'll find them. You can change the colour of the page to go into black for night mode or sepia to reduce the start contrast. You can adjust text size and spacing.

The books are browsable in many interesting categories -- read-aloud books for kids, bathroom reads, retro reads, long reads for a commute, night reads, etc. Rather a fun way to organise content. And you can also look through all the authors. All this is in the Discover section. Read, is obviously where you read, and Me is where your transaction history is saved.

But here's the interesting one. Right up front, on top, you also have the Write tab. And you guessed it: you can publish your own stories on the app. But you have to send two chapters to the editors for approval. If it's good enough, you're on. It's an ambitious project centred around the democratisation of publishing.

Juggernaut Books is going to pull in celebs and well-known authors to populate the app with books. Many of these are serialised so that you get one chapter each day. This seems to be meant to hook those who don't have the reading habit. Waiting to know what happened next in the story...could  keep them wanting more. At present, the books are all short and I don't know if they're going to get into very long ones in the future -- the focus right now certainly seems to be byte-sized reading.

I'm impressed with how much they've managed to pack into a lightweight app while keeping it clean and clutter free. It's very browsable and smooth. Somehow, they even have place for reader ratings and reviews. 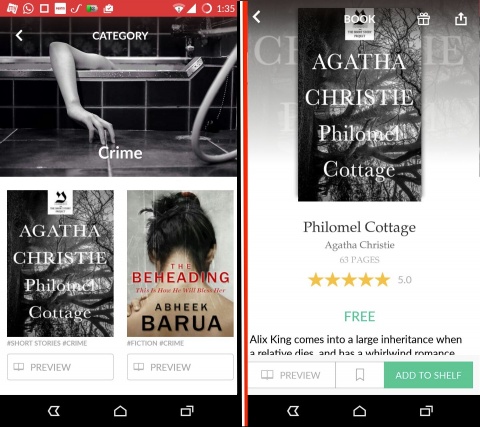 The Juggernaut app is remarkably easy to install and use: no setup needed. There are free 'books' or short reads too

They don't have an iOS version yet as of today, but that is reportedly coming soon, before end-April (it's just been submitted to the iOS App Store for approval, according to co-founder Durga Raghunath).

Lila Ray is a corporate consultant who likes her gadgets almost more than she does her shoes. Write to her at [email protected] .