Home » Internet » Indian Ended Up Purchasing Google.com For A Minute Via Google Domains

Indian Ended Up Purchasing Google.com For A Minute Via Google Domains | TechTree.com

Indian Ended Up Purchasing Google.com For A Minute Via Google Domains

The sale was immediately cancelled by Google Domains and Sanmay was refunded the $12. It might be surprising if we tell that the domain "Google.com" was available for purchase recently on Google domains. In-fact it was also purchased by an Indian on Sept 29.

The glitch was actually encountered by an Indian Sanmay Ved who was learning more about the user interface of Google Domains, the search giant's service where users can purchase different domain names for their websites.

Sanmay Ved who also is an ex-employee of Google India explained in his recent LinkedIn Post about his experience of being able to purchase the world's most trafficked website for mere $12. It is being said that the curious Sanmay typed Google.com and clicked on Search Domains and surprisingly, he was shown Google.com as being available for purchase.

His LinkedIn Post also speaks in detail about how he tried his hands on purchasing the domain. It is also being said that the transaction was successful and he even received a message confirming his credit card being charged. 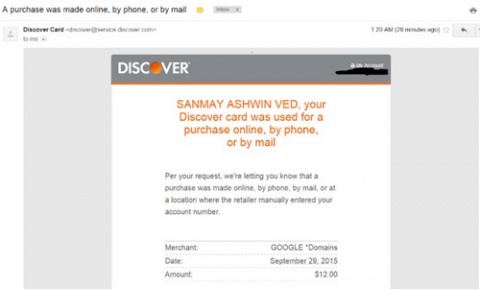 While he was able to access the webmaster controls for a minute, it is being said that Google Domains immediately cancelled the sale and refunded the $12 domain name charges to Sanmay.

However, it is being said that the domain is currently being shown as unavailable after Sanmay reported about the incident to Google Security.