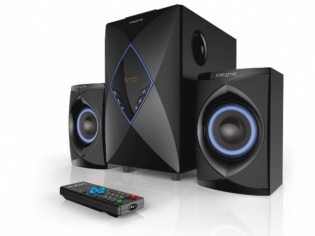 Moving forward to the technical specs end of both the new speaker systems, let us first get on to the Creatvie SBS E2800 which comes with 50W output via two satellite speakers and a wooden sub-woofer cabinet which the company claims to create excellent bass reproduction.

Also, the SBS E2800 features RCA connectivity, built-in FM Radio along with support for USB Flash Drive and a slot for SD cards.

To top this, the SBS E2800 comes with a wireless remote for controlling the speaker.

On the other hand, Creative SBS E2400 is a speaker system which comes with 24W output while other options look much similar to the SBS E2800.

With affordable price tags, it looks like the company is aiming at users who look for a powerful and at the same time affordable all-in-one home entertainment speaker system.

While both the speaker systems have been announced on Monday, they are said to be available for purchase in India only from the end of Sept 2015.