BlackBerry enjoys greater demand as compared to iPhone in India. 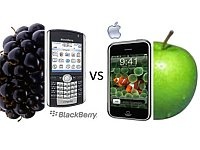 Research in Motion (RIM), which had entered India in 2004, has certainly taken the market by storm. RIM claims to have sold more BlackBerry units in India than any other country. Reportedly Apple, one of the biggest smartphone manufacturers, has sold fewer handsets as compared to BB and Nokia. RIM's BlackBerry Messenger's popularity in India can be attributed to the fact that it was the first free messaging service.

BB's substantial marketing strategy may be the reason for its triumph over Apple in India. Apple depends solely on word of mouth, since it hasn't done much advertising in India. Apple shipped 62,000 iPhones to our shores in the quarter ending 30th June. According to estimates by Framingham, a Massachusetts-based research agency, this number is fewer than low-volume markets such as Norway, Belgium, and Israel.

Bloomberg.com suggests that one of the causes for the low numbers is that most Indians do not have access to 3G on an iPhone, thus leading to poor internet connectivity. Moreover, Apple products are not easily accessible in India, and consumers often have to seek out third-party retailers. Viren Razdan, Managing Director of consulting firm Interbrand, states, "Apple is waiting for consumer maturity and infrastructure". Therefore, Apple needs something more than just its global reputation to improve its consumer base. In light of Viren Razdan's words, that something is probably a willingness to invest in the Indian market.