The open sale by Xiaomi is likely to clash with that of Lenovo's. 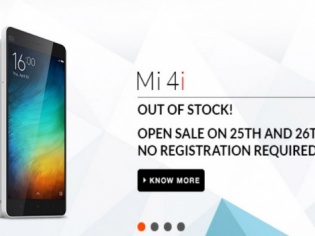 Chinese smartphone maker Xiaomi is all set to bring its Mi 4i to its customers through an open sale on Flipkart.

This means that, the smartphone which gained popularity recently for its good specs and cheaper price will now be available for purchase without any registrations on May 25 and May 26.

To remind you, the smartphone until now was sold through the company's much successful flash sales models.

To add more into this, the company has so far held 4 flash sales for the Xiaomi Mi 4i smartphone which have all turned out to be successful.

However, there has been no information about the number of units being available for the open sale.

Surprisingly, the open sale by Xiaomi clashes with the open sale of Lenovo A6000 Plus on the same dates which clearly shows that customers and the two companies might have a tough time around.

[Also Read: No Invites Required To Buy Lenovo A6000 Plus On Monday And Tuesday]

This pretty much looks like a direct face-off among both Xiaomi and Lenovo.

Coming to the specs of the Xiaomi Mi 4i, it comes with a 5 inch fuill HD IPS OGS Display, 1.7 GHz Snapdragon 615 octa core 64 bit processor paired with 2 GB of RAM and 16 GB of internal memory.

Also, while the smartphones comes with a 13 MP rear camera, it also gets a 5 MP selfie camera with 80 degrees wide angle lens.