Google And Twitter Team Up To Display Tweets In Search Results | TechTree.com

Google And Twitter Team Up To Display Tweets In Search Results

The feature is for now available only on Android and iOS platforms. 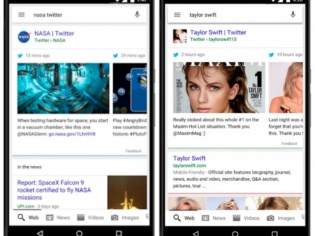 After showing up recommended apps to install according to the search  results, Google is now all set to display tweet related to the search query.

So, this means that if you are interested in hearing more from Taylor Swift, a quick search on Google will display her most recent tweets.

This does sounds interesting and the partnership between Google and Twitter isn't new. We can recall that the two were partners and had a slight complicated relationship back in 2009 when Twitter was still young and inexperienced.

However, this renewal is said to allow Google to get more real time results in its search queries and also help Twitter boost engagement after a period of sluggish user growth.

Going a little deeper into this, Google now has access to a stream of tweets known as the firehose which sprays nearly 9,000 tweets per second into the Internet.

Also, we can pretty much predict that the tweets that appear in Google search as visible for the whole of Internet users searching for something relevant.

Google, in its official blog explains that this feature is for now available only on mobile devices which means that when you are searching on the Google app or any browser on your phone or tablet, you can find real time content from Twitter right in the search results.

Well, it is clearly visible on the blogpost that the Internet giant believes that this is a great way of reaching out real time info when something is happening.

This feature is expected to soon arrive on web platform too and also in languages other than English.