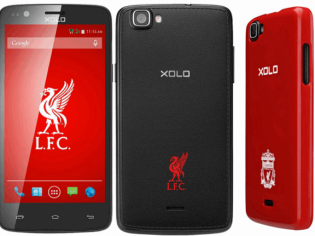 It looks like, Xolo has been recently trying to attract the football fans as it launches the Liverpool FC Limited Edition of its popular 'One' smartphone.

We are pretty much aware that Xolo and Liverpool FC have both taken various activites to promote football across the country and deepen with engagement with young fans.

The new Limited Edition smartphone features Liverpool FC's iconic Liverbird logo printed on the leather back of the Xolo One. The handset also includes a LFC-branded charger, LFC-branded back panel, an authenticity certificate and dozens of Liverpool wallpapers and LFC boot animation.

The 5MP primary camera of the Xolo One Liverpool FC Limited Edition smartphone is backed by LED flash, while the selfie shooter has VGA resolution. The smartphone features a standard connectivity suite: 2G, 3G, Wi-Fi, Bluetooth and microUSB 2.0 and is backed by a 1,700 mAh battery.

To keep it short, we can tell that the new limited edition of 'One' is part of the partnership with Liverpool FC and the 'Mission Million' campaign to promote the game in India.

Priced at Rs 6,299, Liverpool FC edition Xolo One is exclusively available on Snapdeal.