Microsoft announced the Surface 3 — its thinnest and lightest tablet so far. The tablet is a cheaper alternative to the Surface Pro 3 that costs at least $800.

Unlike the confusing RT versions of the past, the Surface 3 runs full-fledged 64-bit Windows 8.1. It will be upgradable to Windows 10 for free. You can run desktop applications on it. Priced at $500 (approx Rs 31,000), the tablet includes a one-year subscription to Office 365 that includes full versions of Word, Excel, PowerPoint, Outlook, and OneNote as well as 1 TB of OneDrive storage.

It sports a 10.8-inch Full HD screen. The tablet comes with pressure sensing stylus support. Microsoft has implemented palm block tech that lets you rest palm while writing. How well this feature works needs to be seen.

The device is powered by Intel's Quad-core Intel Atom x7 processor. It does not require a fan for cooling, which explains the Surface 3's thin profile. Microsoft claims that apart from light work and browsing, you can even play casual games.

The base model comes with 2 GB RAM. In terms of internal storage, you get 64 GB and 128 GB models to choose from. The tablet also includes a full-size USB 3.0 port, a Mini DisplayPort, and microSD card reader.

The Surface 3 has an 8 megapixel rear camera. For Skyping, there's a 3.5 megapixel snapper. To keep you connected on the go, the Surface 3 comes with 4G LTE support. The battery is said to be around 10 hours.

The iconic kickstand has three preset positions — desk, lap, and canvas. With the kickstand folded in, the tablet is 8.7 mm thick. At 622 grams, it is light too. And of course, it comes with those sleek and colourful Type Cover with backlight. 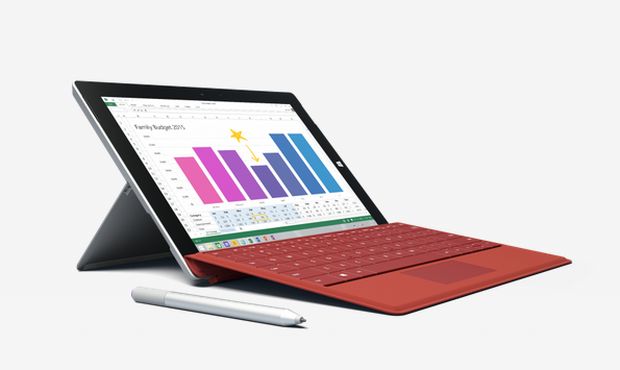 The Surface 3 will release on May 5 in the US. The product definitely seems promising, but as always, Microsoft does not seem to have plans to release it in India.