Taj Mahal One Of The Top Google Street View Destination

It is at No. 3 in Street View destinations in Asia behind Japan's Hashima Island and Mount Fuji 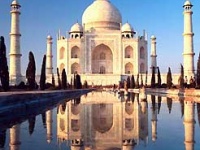 Japan is the most visited place on the Googls Street view and occupies seven of the top-10 slots, while Cambodia occupies two.

Taj Mahal in Agra is one of the UNESCO World Heritage site which attracts visitors all around the world.

"Taj Mahal has emerged as one of the most popular Asian places for global virtual travellers. The fascination with this grand, symmetrical white marble mausoleum also holds within Asia, with the Taj Mahal ranking as one of the most globally viewed destinations by people in Singapore, Australia, Korea, Philippines, Malaysia and of course, India," a Google statement said.

In India, the Google Street View does not work in the regular cities due, as it does not have the permission. But Google has partnered with Archeological Survey of India and has 3D view of more than 100 monuments in India.

Taj was added to the list only in 2014 and has since been one of the most favoured destination.