A feature-rich, 7" Android tablet with voice and video call support. 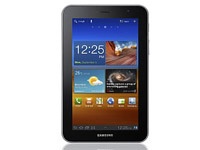 Samsung has added another tablet to its portfolio, the GALAXY Tab 7.0 Plus. As its name suggests, this Android 3.2 (Honeycomb) device sports a 7" display. The announcement seems to have come at the right time, just when a recent report has suggested that Indians favour 7" tablets over their 10" counterparts.

The tablet will be available in Indonesia and Austria by the end of October. The global release will follow "soon after", though it's unclear exactly when. The company hasn't revealed any pricing information yet.