The software-giant launches mid-range smartphones at the MWC 2015. 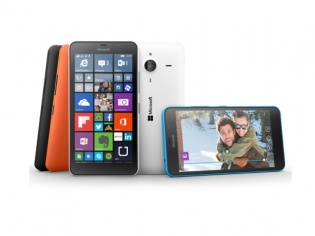 After big announcements coming from the Android camp, Microsoft made its presence felt on the second day of the MWC (Mobile World Congress) 2015 in Barcelona. The software-giant introduced Lumia 640 and Lumia 640 XL, two smartphones that belong to the budget to mid-range category.

Both the handsets run the latest Windows Phone 8.1 with Lumia Denim out-of-the-box. Microsoft has also confirmed the upcoming Windows 10 update for these phones. Other features worth mentioning are HERE maps (offline sat-nav) and Office suite.

The Lumia 640 and 640 Plus are powered by the tried-and-tested Qualcomm Snapdragon 400 chipset. The quad-core processor is clocked at 1.2 GHz. To handle demanding apps, the manufacturer has thrown-in 1 GB RAM. Internal storage is 8 GB. You can add in another 128 GB via a microSD card slot. The device is backed by a 2500 mAh battery.

The 640 sports a 5” HD (1280x720) IPS screen. The pixel density is around close to 300 ppi, which is enough for a non-premium smartphone. For scratch-resistance, the screen is protected by the Gorilla Glass 3.

In the photography department, you get an 8 megapixel camera with LED flash. There's also a front-facing snapper for video calls. With Lumia camera 5.0 software, you get access to advance camera options such as shutter speed.

Going by the design, the 640 looks like a direct successor of the 2013's Lumia 620. It features a layer of translucent plastic over coloured polycarbonate.

The Lumia 640 XL seems unwieldy with its 5.7-inch screen. At HD resolution, this IPS screen includes many features such as ClearBlack (polarisation filter to reduce glare), Glance Screen, and Gorilla Glass 3.

The phone sports a 13 megapixel camera with Zeiss (German lens-maker) optics. For selfies, you get a 5 megapixel front-facing snapper.

Microsoft is offering a few goodies with these phones. The Lumia 640 XL comes with a one-year subscription to Office 365 Personal for one PC or Mac and table (Windows, iPad or Android). This subscription also includes 1 terabyte of storage on OneDrive and 60 minutes of Skype calling per month to landlines in over 60 countries and mobile phones in eight countries.