The selfie-focused Android smartphone sports a 13MP front and rear camera for the best possible selfies. 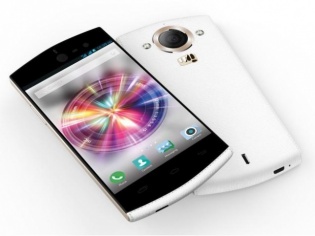 After a long wait, Micromax has finally revealed that its new Canvas Selfie phone is available at Rs. 15,999.

To remind you, it was in December 2014 that the domestic mobile maker had announced its selfie-focused Android smartphone which comes with 13MP front and rear cameras.

It is believed to be a very unique thing among the mobile phones in this category to have a 13MP front camera which is accompanied by an LED flash.

There have been reports that the phone will be available in mystic blue and angelic white color variants.

To add a more classy look, the company has sported a faux leather finish at the back of the new phone.

Powered by a 1.7GHz MediaTek octa core processor and 2GB RAM, the phone comes with 16GB internal storage and a microSD card slot that supports cards of up to 32GB. The phone runs Android 4.4 KitKat.

The cameras; both rear and front, surprisingly have auto focus and Sony sensors for better images.

And for all those beauty conscious women, this phone seems to be a boon as it comes with inbuilt beauty tools for taking better selfies in the camera application including 'Eye Enhancement' which  makes eyes bigger and brighter, 'Face slimming' which offers high cheek bone effects and rid you of the double chin, 'Skin Smoothening' which helps remove blemishes, 'Teeth Whitening' for whitening teeth and 'Remove Oil' to get rid of the oil patches.

Having a display screen of 4.7-inch HD which is slightly small than many other phones, the dual sim smartphone supports 3G, Wi-fi, Bluetooth 4.0 and GPS connectivity options. It comes with a 2300mAh battery.

While comparing the phone with other selfie focused phones like HTC Desire 820 which sports an 8MP front camera, the Canvas Selfie seems to stand out and boast its great features.