The device will be sold exclusively via e-retailer Amazon.in in India 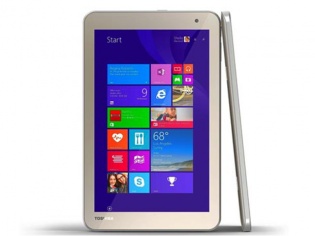 Toshiba has become the latest big-rig electronics manufacturers to jump into the affordable Windows tablet race in India with the launch of the WT-8 at Rs 15,490. The 8-inch device runs on Microsoft's Windows 8.1 operating system, and is available exclusively on e-retailer Amazon India's website.

The Toshiba WT-8 features an 8-inch WXGA (1280x800 pixels) display and is powered by an Intel Atom processor clocked at 1.83GHz, coupled to 1GB of RAM. On-board storage stands at 32GB, with users having the option to expand that by up to 128GB with the use of a microSD card.

In terms of imaging there's the obligatory 1.2MP front-facing camera for making video calls and taking selfies, and a 5MP snapper rests at the rear of the device. The WT-8 is powered by a 3,788mAh battery that the company claims it good for up to 10 hours of battery life, or 8 hours of video playback.

Other features include stereo speakers powered by Dolby Digital Plus, while the device also ships with a Y-data and charging cable that allows users to juice up the device while also plugging in an OTG peripheral. The device weighs in at 380 grams and will go up against the Notion Ink Chain 8 Windows tablet, which retails for 9,999.