An elegant yet functional design along with the right price tag will make this a great competitor for the tablet market. 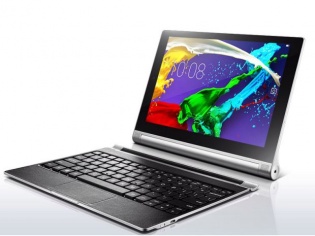 Lenovo has finally launched its Yoga Tablet 2 series of tablets that are powered by Intel chipsets. The tablets are priced in the mid-range and come with a beautiful and functional design that will make them perfect for everyday use.

To begin with, lets make it pretty clear that these are not one of those dual boot monsters like ASUS’ Transformer series. These are basically four variants in total; an 8 inch and a 10 version powered by Android KitKat 4.4 and an 8 inch and a 10 version running Windows 8.1 inside. Lenovo seems to have made a smart choice by picking the quad-core Intel Atom Z3745 Processor that is compatible with both Android and the Windows OS.

What is special here is indeed the design. There is the new hang mode and while the 10 inch versions of both tablets come with the Clamshell Bluetooth keyboard dock, the 8 inch models leaves you just with the the touch screen to type with. As for the specs they are pretty similar with minor variations for all 4 models; the only change being the display, that is an 8 inch one on the smaller tablet while the bigger model gets a 10 inch one. There is also the larger battery which makes use of the bigger real estate.

As for the hardware specifications, they are as follows:

As of now Lenovo only has the Android tablets up for sale on Flipkart where the tablets will be exclusively sold. As for the pricing,

Lenovo has not yet released pricing information about the 8 inch, Windows 8.1 powered tablet yet.