Prices for the new iMac start at $2,499 making it all too clear that Apple is going after professionals that deal with 4K video footage 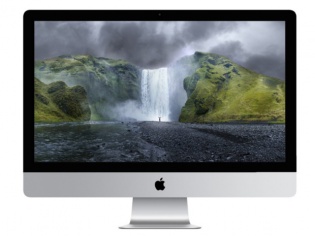 Alongside unveiling two new iPads at yesterday's event, Apple also outed the long rumored 27-inch iMac with Retina Display. The high-end all-in-one comes with a 5K display that the company claims to be the highest resolution screen on the planet, and will retail at a starting price of $2,499.

The biggest new feature of the iMac is of course its display. It sports a resolution of 5,120x2,880 pixels, which is 67 percent more pixels than you get with 4K. If the price tag didn't tell you already, Apple is targeting professionals working with 4K video in Final Cut Pro X with the 27-inch iMac with Retina Display.

Despite that insane new display, Apple claims the device is up to 30 percent more energy efficient than the previous generation iMacs. Moreover, the company has managed to keep the body of the new iMac as slim as before, with the outer edges measuring in at just 5mm thick.

Behind the display, the new iMac ships with a 3.5GHz Intel Core i5 processor that can be upgraded to a 4GHz i7. The device also comes with AMD's Radeon R9 M290X graphics card comes as standard, with 8GB of RAM and a 1TB Fusion Drive.

For those who are looking for a bit more oomph, the iMac can be decked out with up to 32GB of RAM, AMD's Radeon R9 M295X graphics card, a 3TB Fusion Drive along with 1TB of PCIe flash storage. In terms of software, the iMac with Retina Display will run Apple's latest and greatest OS X Yosemite right out of the box.