Google's All-New Nexus 6 Is A Moto X On Steroids

The device is not only the largest ever smartphone from Google, at $649 it's also the most expensive Google's new Nexus 6 smartphone is just massive. It was unveiled yesterday alongside a piece of software that was designed more specifically for it than any other device on the planet. Built by Motorola, the Nexus 6 is basically a Moto X on steroids, which is exactly what's needed for a device that needs to uphold the honor of Android 5.0 Lollipop.

Dwelling into the past, we're already familiar with the fact that all Nexus smartphones are lightly modified versions of existing devices. For instance the Nexus 5 was clearly an LG G2, and the new one is well, clearly a blown up Moto X. But that hardly makes Nexus devices seem any less charming, as people just consider those phones as great platforms to start with.

The Nexus 6 features a cool (or friggin ridiculous) 6-inch display, boasting of Quad-HD resolution which should make it incredibly sharp despite its size. The device is powered by a Qualcomm Snapdragon 805 processor coupled to 3GB of RAM, a carry over from the Moto X (second gen). Other hardware specifications include a 13MP primary camera at the rear, a 2MP front facing unit and 3,220 mAh battery to power all that. A welcome change on the Nexus 6 when compared to the Moto X are the dual front-facing speakers, but Google skipped on the customization features that Motorola offers. The Nexus 6 will be available in either blue or white and in 32GB or 64GB variants.

In terms of design, the Nexus 6 looks similar to the Moto X (2nd gen), featuring a metallic rim on the periphery , a dimple with the Moto logo at the rear and even the ring flash around the primary camera module. The Moto X is a very well built phone, so there's no reason to expect the new Nexus won't feature a similar quality of construction.

Apart from all those flashy hardware features, the other big story with the Nexus 6 will be Android 5.0 Lollipop in its purest form. We've already heard of the many new design and functional features of the new software, including the improved battery saver mode which when coupled to Motorola's Turbo Chargers, should clearly keep you going all the time. 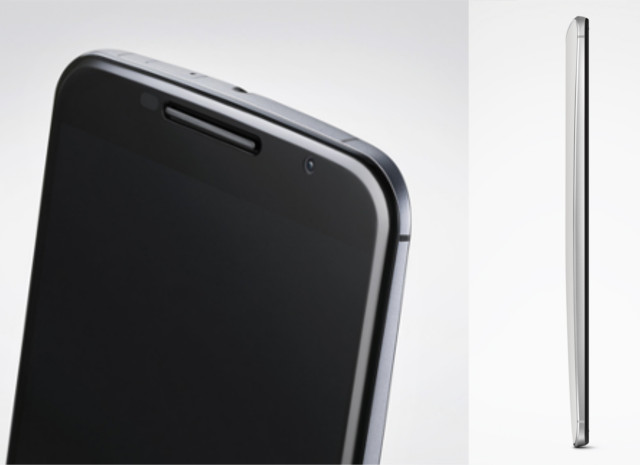 With the massive bump in size however, comes a bump in price. The Nexus 6 will cost $649 (Rs 40,000) off contract in the US, making it the most expensive Nexus device ever. Google is clearly running after premium iPhones from Apple, showing a clear shift in the company's priorities fro its Nexus line. Also it seems like Google isn't willing to stomach the cost of selling people pure Android smartphones on the cheap anymore, which is quite fair.

Given the large size of the Nexus 6, it's bound to put off quite a lot of buyers, which is why the company will continue to sell its more manageable Nexus 5. Google will begin taking pre-orders for its new Nexus smartphone on October 29 in the US, while there's no word yet on when the device may land in India.