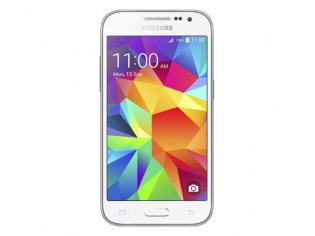 A new entry-level smartphone from Samsung, the Galaxy Core Prime, was briefly listed on e-commerce site Flipkart, carrying a price tag of Rs 8,499. In terms of specifications the device goes head to head with the first lot of Android One smartphones and the Moto E, however the listing was soon pulled down.

The Galaxy Core Prime was spotted by Digit, according to whom the device features a 4.5-inch WVGA display, and is powered by a 1.3-GHz quad-core processor coupled to 1GB of RAM. The Samsung device runs on Android 4.4 KitKat, however it would be highly unlikely that the company would treat it to an Android L update.

Other hardware specifications include a 5MP primary camera, a 2MP front facing unit and a 2,000mAh battery. Internal storage stands at 8GB, which is twice as much as the Android One devices, with users also being able to take advantage of the microSD card slot to expand memory.

At the same time, reports from China suggest three versions of Samsung's Galaxy Core smartphone are currently seeking approval in the country. They include dual SIM and LTE variants, the latter of which would be a welcome addition in the entry-level smartphone market.

While the Galaxy Core Prime is noticeably more expensive that the equivalent Android One devices, the pricing or availability of the device in India isn't confirmed. The listing on Flipkart was taken down, reading “this product has been permanently discontinued”.