LG Lists The Mid-Range L Bello On Its Website; Priced At Rs 18,500 | TechTree.com 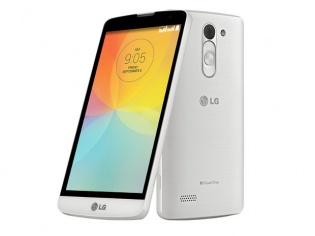 LG has listed its new mid-range L Bello smartphone on its official India website, carrying a price tag of Rs 18,500. The device was unveiled last month, and borrows a lot in terms of its design for the company's flagship G3 smartphone.

There's no word yet on when the device will be launched, but judging by its appearance on the company website with price in tow, it shouldn't be long. The device will be available in three shades – black, white, gold – and features the volume and power buttons at the rear of the device.

Apart from borrowing its design from the larger G3, the L Bello also gets nifty features like the 'Knock Code', smart keyboard and gesture controls which were debuted on its larger sibling. However, the rest of the device is typically mid-range, with worries of LG having gotten the pricing all wrong being fairly visible.

The L Bello sports a 5-inch FWVGA (854 x 480 pixel) IPS display, which hides behind it a 1.3GHz quad-core processor coupled to 1GB of RAM. The device runs on Google's Android 4.4.2 KitKat operating system, with a UI that looks similar to what we got to see on the flagship G3.

There's only 8GB of internal storage on tap, however users do have the option to expand storage via a microSD card, and also get 50GB of cloud storage from LG. Above the rear buttons sits an 8MP primary camera with an LED flash, while the front facing unit boasts of a measly 1MP resolution.

In terms of connectivity its the usual tale of Dual SIM capabilities, 3G, Wi-Fi and Bluetooth 4.0. All that hardware is powered by a 2,540 mAh battery, which the company simply claims is long lasting rather than stating an actual figure.