Home » Tablets » Rumour: iPad 3 Could Be Launched On 7 March

Rumour: iPad 3 Could Be Launched On 7 March

Apple sends out invites with cryptic message for event. 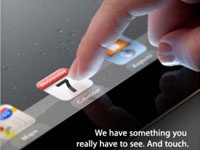 Finally, it seems that the iPad 3 will be launched soon. Apple has sent out invites to reporters for a March 7 event in San Francisco. The email shows a photograph that reads, “We have something you really have to see. And Touch”, and there seems to be an iPad in the background. Furthermore, the venue is Yerba Buena Center for Arts, where the company is known to unveil new products. Apple, has not yet confirmed if this is indeed about the iPad 3.

The iPad 3 has been a highly anticipated device with new rumours coming out regularly regarding its specifications and its launch date.The device is said to have a similar size as its predecessor, but is expected to ship with iOS 5 and better hardware such as more pixels in the same screen size, and a faster processor. Traditionally, Apple retains pricing for the latest iPad version and reduces the cost of its older iteration. So going by that logic, iPad 3 should be priced similar to the iPad 2, with costs being slashed for the latter. March 7 is just around the corner, so we will not have to wait too long to find out.