Sony To Launch Its Smartwatch 3 &amp; SmartBand Talk In India By December | TechTree.com

While Sony's latest smartphones are here, we're going to have to wait a little longer for their new wristwear 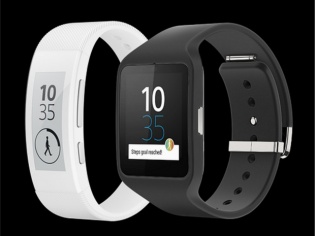 Sony has revealed that it plans to bring the Android Wear-powered Smartwatch 3 and SmartBand Talk fitness band to India in the month of December. The devices were unveiled alongside the Xperia Z3 family at the IFA conference earlier this year, and while Sony's latest smartphones have made it to India, we're going to have to wait a little longer for its wearables.

The Smartwatch 3 is Sony's first device to run on Google's Android Wear operating system, meaning it should function almost exactly like LG's G Watch and Samsung's Gear Live. On the hardware front the device sports a 1.6-inch 320×320 square display, 1.2GHz quad-core processor, 512MB of RAM and 4GB of storage.

With Google locking down the software side of things with Android Wear, Sony is left to play around with the hardware, and they've stuck to what we've seen on previous models. The main unit is removable, allowing users to easily swap bands, which will be available in a variety of colours.

The SmartBand Talk is Sony's other wearable device, and might we say the more interesting of the two. Essentially a fitness tracker, the company has added a 1.4-inch rectangular e-ink display at the front allowing users to answer calls, receive notifications, read messages and a few other nifty things.

The device is in some ways a primitive smartwatch, but if priced similarly to its predecessor, the SmartBand talk could be a great device to own, especially in India. Further, Sony has stuck with its pill design for the main unit, while the bands can be swapped out by buyers for various different shades.

Pricing details of the two devices aren't known at this moment, but it's likely that the Smartwatch 3 will be priced in line with what Samsung and LG ask for their first generation Android Wear devices. The SmartBand Talk on the other hand offers more features than a regular fitness tracker, but any elevation in price would put it in contention with smartwatches.