Improved in every way, the new Moto X can now take on the competition even on paper 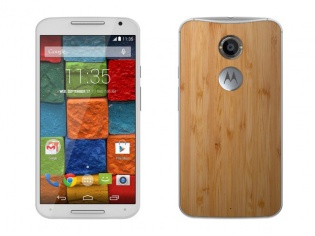 Motorola will launch its second-gen flagship Moto X in India on Wednesday midnight, priced at Rs 31,999 for the standard device and 33,999 for the wood and leather back variants. The device will be sold exclusively via e-commerce partner Flipkart, who's promising to offer exciting launch day deals.

The device was formally unveiled earlier this month, and like its predecessor has received great reviews from the media globally. The Moto X (2014) goes head to head with Samsung's Galaxy S5, LG G3 and HTC One (M8), boasting of similar specs and a high quality construction that's come to be expected of flagship devices.

The second-gen Moto X gets a larger 5.2-inch FullHD (1920x1080 pixel) display and is powered by a 2.5GHz quad-core Snapdragon 801 processor, coupled to 2GB of RAM. The device will be available only in the 16GB variant in India, and sadly there's no option for users to expand storage via the use of a microSD card.

Motorola has bumped up the primary camera resolution to 13MP on the new Moto X, while the front facing shooter will be a 2MP type. The phone also comes with a novel dual-LED ring flash, that supposedly diffuses the light better. The battery powering all that hardware is rated at 2,300mAh and should last an entire day.

In terms of software, Motorola continues to offer an essentially stock Android experience, and the Moto X runs the latest variant of Android 4.4.4 KitKat. The company has promised to update the device with Android L, which if the rumours are true should be unveiled on October 10.

While the Moto X now comes with specs that put it in contention with flagships from other manufacturers, what sets the device apart are a bunch of exclusive features. Apart from last year's Active Notifications, the new device also comes with four IR sensors that help the device respond to user gestures even in an inactive state.

The icing on the cake has got to be the aluminum rim running around the periphery of the device, that actually forms part of the phone's chassis. According to Motorola, the rim helps boost wireless signal and preliminary tests have shown the device does connect to wireless networks better than rivaling deices.

The second-gen Moto X, like its predecessor, comes with support for only a single SIM and ditches the 4G LTE connectivity that's on offer in the global variant. The company also announced that it would continue to sell the previous generation Moto X, which received an odd price cut recently.