Home » News » Could We Have A Gold Moto 360 Smartwatch On The Charts?

Could We Have A Gold Moto 360 Smartwatch On The Charts? | TechTree.com

Could We Have A Gold Moto 360 Smartwatch On The Charts?

Given that the smartwatch market is still in its infancy, it isn't surprising that manufacturers are trying different things 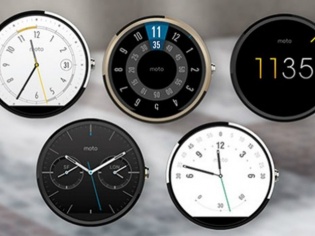 Motorola has clearly made a splash with its Moto 360 smartwatch, but it seems that the company is holding back on a few secrets even now. A promo image posted on the official Motorola website showed what clearly was a gold Moto 360. The company went on to take down the image immediately, and distanced itself from confirming the slip-up.

The Moto 360 is currently available only in black and silver colors, and can be had with an assortment of straps (Motorola doesn't yet offer the metal strap). A gold Moto 360 could now be on the charts, and would fit in perfectly with the company's efforts to offer a plethora of choices to its buyers.

When contacted a Motorola spokesperson did not comment on the appearance of the gold Moto 360 on the company's website. The person however did say, “Although we can't comment on gold specifically, we’re always exploring new materials and we intend to provide Moto 360 in a selection of styles in the future.”

While that's a great example of vague press talk, GSM Arena believes the emphasis on 'materials' rather than 'color' could mean something more. Frankly, we don't know what to make of it, although the possibility of a gold plated Moto 360 isn't ruled out, especially since the Apple Watch will ship in a gold version.

If true, we could see a more premium Moto 360 which ditches its modest $250 price tag, and truly takes on premium dumb watches. It isn't known how successful something like this would be, but given that the smartwatch market is still in its infancy, it isn't particularly damaging for manufacturers to try different things.