Home » News » Tag Heuer Wants To Make Smartwatch; How Will They Be different

Tag Heuer Wants To Make Smartwatch; How Will They Be different 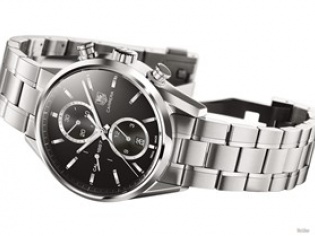 Be it the design or the speed, the smartphones have almost reached a stagnation point and it looks like the next tech revolution will happen in the smartwatch segment. Despite being called a watch, it is some of the biggest smartphone brands that are manufacturing it.

The Apple Watch has been the latest entrant and considering they have been the pioneers of innovation on more than one occassion, they are expected to improve quickly here also. Unlike the early entrants the latest company to show interest is Tag Heuer, the first watch maker to show interest in smartwatches.

"We want to launch a smartwatch at TAG Heuer, but it must not copy the Apple Watch," Jean-Claude Biver told Sunday newspaper NZZ am Sonntag.

"We cannot afford to just follow in somebody else's footsteps," Biver said, adding the Swiss watch industry would present smartwatches at the latest at the Basel watch fair next spring. He did not give further details on the planned smartwatch.

For all their advances and unique feature, the design and utility has been a tough nut to crack for the companies. On most of the occasions, the smartwatch has never been a watch, but a miniature version of the smartphone, which can be worn on wrist.

This is where the entry of watch companies may disrupt the market. The companies were producing premium traditional watches would have been worried about pricing it high, but the entry of Apple and its reception seems to have changed the scenario.

The Apple Watch doesn’t come cheap and has a premium appeal to it. It has also managed to generate enough interest and this would have been noticed by some of the big watch makers.

Tag Heuer seems to be the first to jump into the bandwagon. Let us look at some of the things that a watch maker can bring into a smartwatch.

For the premium watch companies, it is all about the design. At a time when the companies have been juggling between the square and round dials in smartwatches, they have pelnty of room to experiment. Considering that it has all been about design for the traditional watch makers and with their decades of experience, they will surely know a few things about the design of watches and They might concentrate on the basic function of a watch - showing time well.

Even in this age, if the watches are selling then it is due to the functions that are available in it. No one will know better about what make a watch success than these companies. They might lack their experience in the software aspect of it, this might be an advantage as they will come with no baggage. Instead of following on the footsteps of Google or Apple, there might be a good chance they might be setting the rules in future which all tech giants may have to follow. The chances of this happening is good because watch makers will think from the perspective of humans rather than shoving in all the apps like smartphone companies do.

While chasing the technology and making their smartwatch one of the best in the business, it looks like the companies have been taking it away from the humans. May be the entry of the watch makers will disrupt the market and the change the way we look at it.