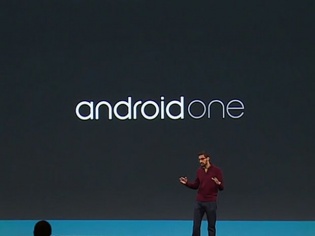 Google’s I/O developer conference is off to a great start with the Android One program announcement. This initiative will help local manufacturers deliver stock Android experience at an affordable price. Needless to say, Android One is meant for developing markets such as Indian subcontinent and parts of Africa.

In his keynote speech, Google’s Android chief, Sundar Pichai, stated that the company is working towards getting the feature phone crowd to the Android platform. The search-giant will set certain hardware regulations for the OEMs (Original Equipment Manufacturer). This is similar to Microsoft’s mobile strategy, where the Windows Phone manufacturers are required to use Qualcomm’s SoCs (System on Chip) for consistent user experience. So far, there’s no word on what these restrictions are. However, if Google decides to favour Qualcomm’s Snapdragon processors, it will be a big blow for the chip-maker MediaTek, which powers millions of low-cost Android devices.

Another highlight of today’s announcement is that Google has promised to handle OS updates under the Android One program. This means that users won’t have to wait for these shady low-cost companies to roll out the software updates. However, at this point, we are not sure if these low-cost devices will get the Nexus-like treatment.

Indian handset-makers continue to make their presence felt at major events as Micromax, Karbonn, and Spice are among the first wave of brands to join this program. Just a few months ago, Microsoft partnered with Micromax to deliver some low-cost Windows Phone devices.

Android still remains the leading OS in the high and mid-range segment. However, it has been facing stiff competition from the Windows Phone devices in the budget segment. With this strategy though, Google should have no trouble crushing the competition.