The budget tablet is powered by an Intel Atom processor. 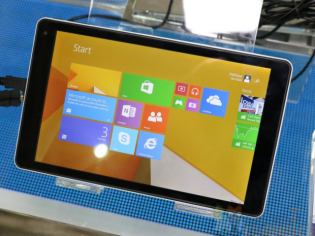 Currently, the tablet market is dominated by the iPad and an army of Android tablets. Microsoft did try to get some market share with its Surface series of slates, but with little success. The problem was its limited availability and expensive price. After acquiring Nokia, Microsoft can now use the Finnish company’s hardware distribution chain to push its devices. To compete with low-cost Android tablets, the software-giant recently started offering its operating system for free on devices with up to 9-inch display. The first company to take full advantage of this scheme turns out to be a Chinese company called Emdoor. Named as EM-i8080, the tablet packs in an IPS screen with 1280x800 pixels.

The tablet is powered by Intel’s ‘Bay Trail’ Atom Z3735G chipset. It has 1 GB RAM, 16 GB SSD storage for faster booting times, microSD slot for expansion. The slate sports a MicroUSB and Mini HDMI ports. According to Mobilegeeks.com, it comes with an entry-level camera, which is likely to be VGA.

On the software front, Emdoor’s tablet flaunts Windows 8.1.We believe that it’s like to be the RT version. However, considering the fact that Intel’s ‘Bay Trail’ Atom Z3735G chipset is based on X86 architecture, it’s compatible with Windows 8.1 Pro.

The EM-i8080 looks quite plasticky, but then that’s fine for budget device. It’s said that the tablet is expected to retail for $100 (Rs 6000). This definitely sounds like a great deal. Edmoor doesn’t have any presence in most counties, so we’re guessing that brands such as Micromax will rebrand and distribute these tablets in developing countries.