A flatter more iOS-like user interface, and refreshed apps including one that allows you to seamless switch between your iPhone and Mac. 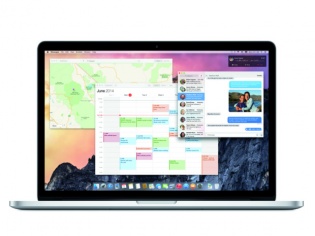 Apple has unveiled the successor to OS X 10.9 Mavericks, and it will be called 'Yosemite,' keeping up with the theme of naming OS versions after Californian landmarks. The desktop operating system has been given a thorough overhaul and sports a flatter iOS-like UI, which was announced at Apple's WWDC 2014 being held in California.

The biggest change as expected is the design of Apple's new desktop operating system and the company has given the boot to the brushed aluminum elements. The new design is now flatter, and translucent, which the company is calling 'materials'.

Apple has also thoroughly re-thought the idea of a notification center, which now displays what could earlier be seen in widgets. Everything from the calendar to weather will now be displayed in the notification center, streamlining information and tools, which were separate widgets on their own.

Spotlight search has also been given some added functionality. Firstly it opens up right in the middle of the desktop rather than to the right, and displays information from the App Store, Wikipedia, Maps, Bing, iTunes, and iBooks.

Updates to other apps and services such as iCloud, which is being called iCloud Drive for OS X, features a very DropBox like design. Mail, which was lagging behind the competition has been streamlined and features a MailDrop functionality that allows you to send attachments that are too big for regular mail.

Apple's Safari browser too has been thoroughly refreshed, featuring a completely stripped down look where you see just the web page in its most basic view. Other tweaks have allowed the browser to load JavaScript upto six time faster than on Chrome and Firefox according to the company.

While the company may have taken the step to unify the designs of iOS and OS X, but interaction between the two operating systems was a big question. Apple unveiled its 'Handoff' app that allows users to start an activity on one device (say an iPad) and then pick up working on it on another device (say your Mac).

A perfect example for this is when using mail you realise typing out the entire body on your iPhone will be too hard and decide to swap for the keys of of Mac instead. Your Mac will be aware that you're using your phone and will let you pick up where you left off from the other device.

To read more about the new features of OS X Yosemite, head over to Gizmodo.