Persia fears the power of GALAXY Tab showcased in an Israeli ad. 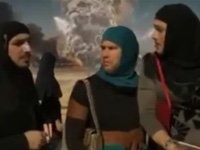 Samsung is feeling the heat over an Israeli commercial, which features a GALAXY Tab 750 involved in the destruction of Iran's nuclear facility. The ad shows four characters from the popular Israeli TV series, Asfur. Disguised as women, the quartet bumps into an undercover Mossad agent, and accidently blows up Iran's nuclear facility. Needless to say, neither Ali Khamenei nor Mahmoud Ahmadinejad was amused.

Reportedly, Iranian officials are finding the commercial insulting as it portrays Israel capable of easily destroying such an important target in Iran. What's more, the ad has been surfaced within a month of the alleged assassination of the Iranian scientist by Mossad agents in Tehran. Therefore, Iran is considering a complete ban on Samsung products.

Samsung's Tehran office has claimed that the company wasn't involved in making this video, and the comercial was an independent production of Israel's HOT cable network. I doubt, Iran will go soft on Samsung, considering the company's home, South Korea is among the countries that have slapped sanctions on Iran over its nuclear program.