Moto E Announced In India; To Go On Sale At Mid-Night For Rs 7000

To set new standards of toughness and quality to the affordable smartphone range in India. Motorola finally launched its much-awaited entry-level, dual-SIM handset today called the Moto E. Competitively priced at Rs. 6999 it will definitely take on a number of local brands and the Nokia Lumia 525 in the Windows Phone space as well.

The handset has been leaked over and over and now we finally get a glimpse of what’s actually in store. Built to last, the phone comes with a sharp 4.3 inch qHD (960 x 540 pixel) scratch-resistant display and is also said to feature a water-resistant splash guard as well. The device is powered by a 1.2 GHz dual-core Snapdragon 200 processor and is coupled with 1GB of RAM with 4GB of internal memory. But fear not, as the handset also comes with expandable memory which it supports up to 32GB via its microSD card slot.

The Moto E comes with KitKat 4.4.2 which is almost similar to the stock version of Android found on Google’s Nexus 5. The 5MP camera takes care of the camera department but the phone lacks an LED flash and a front-facing camera, which is common for phone in this segment. All of the above is powered by a large 1980mAh battery which Motorola claims will last for an entire day on a single charge. 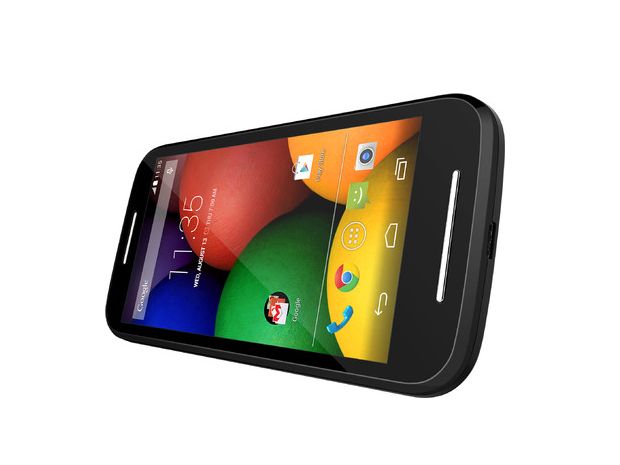 The Moto E will be available for purchase online for Rs. 6,999 at mid-night and so far is available only in black with interchangeable coloured backs being made available shortly.

All-in-all the Moto E is a pretty well-built handset that is set to tackle the budget-segment in India’s massively competitive smartphone market. Will it beat the success of the Moto G? Only time will tell.