Home » Mobiles » After Pink And Red, The HTC One M8 Also Rumoured To Come In Blue?

After Pink And Red, The HTC One M8 Also Rumoured To Come In Blue?

Will you buy one? 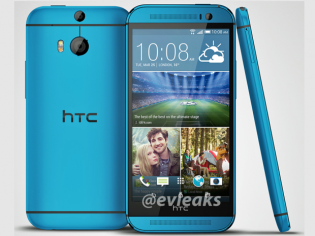 @EvLeaks has been busy we must say, after leaking out the pink and red variants of the HTC One M8. The leaker took to the social network to show us that a blue HTC One M8 is also in the works. This version certainly looks better than the red and the pink one, but still is a class apart from the original silver, grey and gold line up that has been available since launch.

The red handset which was leaked earlier is definitely heading for Verizon’s cellular network in the USA. But HTC could actually make the blue One M8 available internationally considering that it did so in the past with the One M7.

Still then the colour seems to be largely inspired by Samsung who included the colour for its current flagship, the GALAXY S5 during launch itself. But the Samsung GALAXY S5 definitely does not look as good as the metal-clad One M8. The handset is definitely in a class of its own, and you will definitely stand out of a crowd holding a bright blue phone. This is why we think HTC would be better off by including a black version (which will find plenty of buyers) in its One line-up instead. This could be similar to black model available in the Harmon Kardon range that HTC launched recently.