Home » Tablets » "Steve Jobs" Returns With Much Love For Androids

"Steve Jobs" Returns With Much Love For Androids

Look-alike comedian in Taiwanese TV ad is sure to irk Apple fanbois. 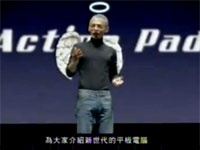 While he is said to have been a harsh critic and opponent of Android devices according to his biography, it seems that Steve Jobs is using one right now. At least that's what a Taiwan TV commercial purports to show with a Jobs look-alike. Comedian and impersonator Ah-Ken dresses up in the familiar blue turtle neck sweater and blue jeans, with white angelic wings and a halo ring to complete the getup to advertise an Android tablet PC for Action Electronics Co.

Faux-Jobs starts with taking the tablet out of his jeans back-pocket and flapping his wings as he introduces the device's multi-language dictionary functions on a giant screen behind him on a darkened stage, similar to one of those Apple keynotes. He concludes the ad with "Thank God I finally get to play other tablets", sporting a mischievous broad grin as he sits on the sofa, tapping away at his new-found favourite tablet. While the ad is in Taiwanese, it has English subtitles. Nowhere does it mention Jobs or Apple by name, but it is absolutely clear whom it means to target and the mannerisms have been impeccably mimicked. Some may find it funny, others may be intrigued, but we are pretty sure that Jobs' fans will definitely run riot.

You can take a look at the Taiwan TV commercial below: