How The Norwegian Army Uses The Oculus Rift To See Through Tank Armour | TechTree.com

Just goes to show that what Mark Zuckerberg said about gaming not being the only use for VR is true. 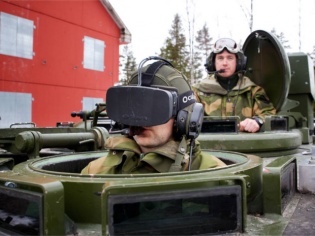 Imagine driving your car with the windows blacked out and just a few portals giving you a glimpse of the outside world. Now imagine driving a truck in the same way, or even better, a battle tank. Well, you probably get the picture.

Tanks don't have large windshields for the driver to see out of. And no, having the ability to drive over pretty much anything isn't an excuse for not being able to see where you're going. To fix the problem, the Norwegian Army has hacked together a novel solution using some civilian technology, namely the Oculus Rift VR headset.

By mounting cameras on the outside of the tank, soldiers were able to create a 360-degree VR feed for the driver. Wearing the Rift, the driver gets an unobtrusive view of his surroundings, effectively seeing through the tank's armour.

As reported by TUjobs the system is still a prototype, it already provides numerous advantages over traditional military developed systems. For one, the cost of the demo unit is about $2,000 which is nearly 50 times cheaper than conventional camera systems the military develops.

The Norwegian Armed Forces may have stolen the tech right out of gamers living rooms, but they aren't just stopping there. While gaming we're served up a plethora of information in the form of various heads-up-displays. Using the Rift the tank driver too can have a map, tilt, speed and other important information displayed to him right in his field of vision.

However, the one biggest flaw holding back the Oculus Rift VR from becoming standard equipment in tanks is eye strain. It's far too great to be used all the time, but can still become an important bit of kit in the gravest of situations where the tank's hatch must be shut.

It's rare for civilian technology to be given such a prominent use on the battlefield, but it goes to show that what Facebook wants with Oculus isn't just about providing people with an enhanced gaming experience. Just as Mark Zuckerberg pointed out after buying Oculus, gaming is only the beginning for Virtual Reality.