Users will also be able to manipulate the floating 3D projections with gestures. 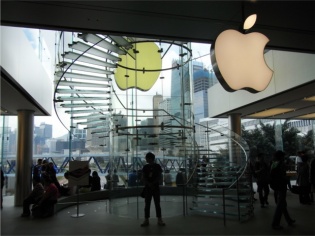 The U.S. Patent and Trademarks Office has published an Apple patent application for an “Interactive three-dimensional display system” which was reported by AppleInsider. The 3D image or hologram can be manipulated by the user with touches, swipes and other gestures.

The invention uses a UFO-shaped mirror box that projects a 360-degree 3D image above a light source. The projected image can then be manipulated by the user with inputs detected by lasers built into the display device. This would be done by a bevy of on-board sensors and processors which would change the shape, size or orientation of the projected image.

While the device is built on a various already proven techniques to produce a 3D hologram, Apple's solution in a bit more complex. The technique is comprised of three parts: a display system that creates a primary 3D image, an optical system that translates the first image into a secondary 3D image in mid-air and a sensor assembly to log user input.

However, Apple doesn't seem to be anywhere close to being able to use the tech in its devices, but seems to be a mere design reference for some future 3D display tech. With Amazon all set to debut its 3D smartphone display technology, the timing of the news is interesting.