Moto X+1 To Come With 25 Different Backplate Customisations, Including Leather

Motorola seems to be taking device customisability up a notch with the upcoming Moto X+1. 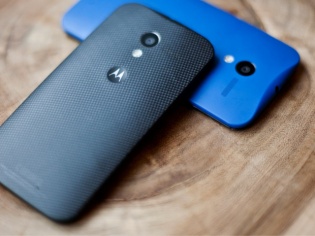 It was just a few days ago that master-leaker evleaks revealed that Motorola's upcoming flagship phone will be called the Moto X+1, along with news that the company will offer leather as an option for customisation. Now it has been revealed that Motorola will offer 25 different backplate options to customers, with four different shades of leather.

According to a Twitter post by evleaks, the Moto X+1 will have four colour options for leather backs – Black, Red, Grey and Blue. Apart from this, users will also be able to spec out their Moto X+1s in a myriad of shades(25 to be precise), including wood back style that the company unveiled with the Moto X.

This isn't surprising as it wasn't just the Moto X's smart features that made it somewhat successful, but also the high level of customisation that Motorola offered its customers. Through the company's MotoMaker tool, buyers could spec out their phones in a variety of different ways, though the option was only open to buyers in the US.

It isn't clear whether Motorola will bring such a degree of customisation outside the US, but it is a possibility judging by the recent success the company has had in overseas markets. Also the company could decide to manufacture the phone outside the US, especially considering that its soon-to-be owner is Chinese.

Motorola's cheaper offering, the Moto G, is manufactured in China, and has proven to be a massive success the world over. The company could decide to do the same to offer better value to customers of its upcoming flagship device, while setting up local assembly units to open the door to customisations.

The Moto X+1 is expected to be launched this summer, coming alongside the recently unveiled Moto 360 smartwatch. Leather backs seem like a logical step towards making the phone-smartwatch pair sell better, given that the wearable device will come with swappable leather straps as well.