More cheer if you were holding out from buying a Moto G; other networks operators should follow suit 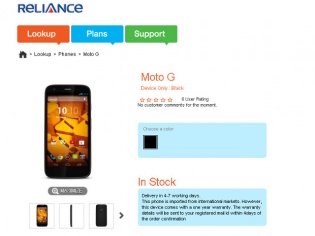 Following the massive success of its Moto G sold exclusively through online retailer Flipkart, Motorola is now looking at ways to further enhance its presence in the Indian market starting with the launch of a CDMA variant of the handset tied to telecom giant Reliance Communications' network.

The CDMA variant of the phone has been priced at Rs 13,490 for the 8GB variant, with no word on whether there will be a 16GB variant. RCom is offering customers attractive finance options, with 6 and 12 month EMIs with zero downpayment.

Following the massive first day rush for the Moto G, Motorola along with Flipkart have been constantly coming out with offers to keep up the sales. The company's tie up with Reliance is only the second partnership it has forged since its return to Indian shores.

Motorola has been in talks with retailers and service providers alike who want in on the action. So far only Flipkart has been selling the Moto G, and then the Moto X. Specifications of the Moto G remain exactly the same except for it supporting CDMA networks.